For the third year in a row, life expectancy for the average American man has fallen, according to the latest data from the Centers for Disease Control and Prevention (CDC).

Men in 2017 could expect to live four months fewer than they could in 2014, the report, released Monday, reveals.

Life expectancy declined for Americans as a whole in two out of the last three years – but has stabilized among women.

But deaths of despair – those caused by alcohol, suicide and, most notably, drug overdoses – continue to plague men in the US, so much so that they are driving down life expectancy nationwide. 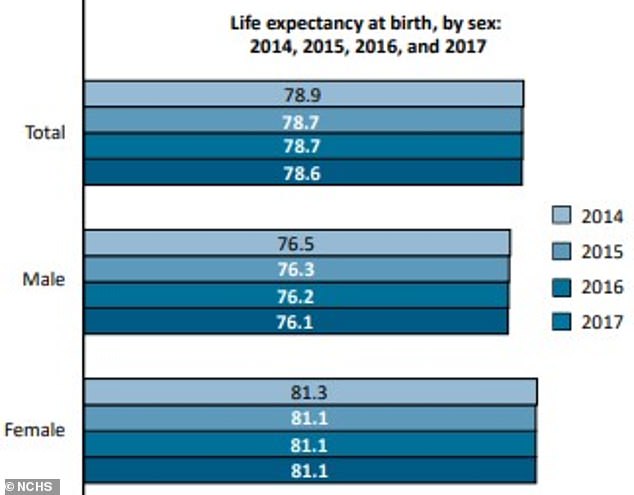 The American life expectancy has fallen from 78.9 in 2014 (top, lightest blue) to 78.6 years in 2017 (darkest blue). The decline is driven primarily by men (middle section), whose life expectancies have fallen twice as steeply in the last three years

Humanity has invested a great deal of time, money technology and effort into surviving longer and longer.

And in the US, it’s been pretty effective.

Medicine and medical technologies continued to improve, gross domestic product in the US has continued to increase (with the exception of a dip triggered by the 2009 recession), yet the tide in life expectancy turned.

‘Significant decreases in life expectancy have been observed each year since 2015 among men, while remaining stable among women,’ wrote the CDC report authors.

Men’s life expectancy has declined twice as steeply as women’s has since 2014, falling by half a percent in just three years.

The new report credits the overall decline in life expectancy to rises in deaths from ‘leading causes,’ including Alzheimer’s disease, suicide and ‘unintentional injuries’ – the latter of which is the classification into which drug overdose deaths fall.

About one percent of deadly drug overdoses were ruled homicides, about seven percent were classified as suicide, but the vast majority were considered ‘unintentional injuries’ in 2017. 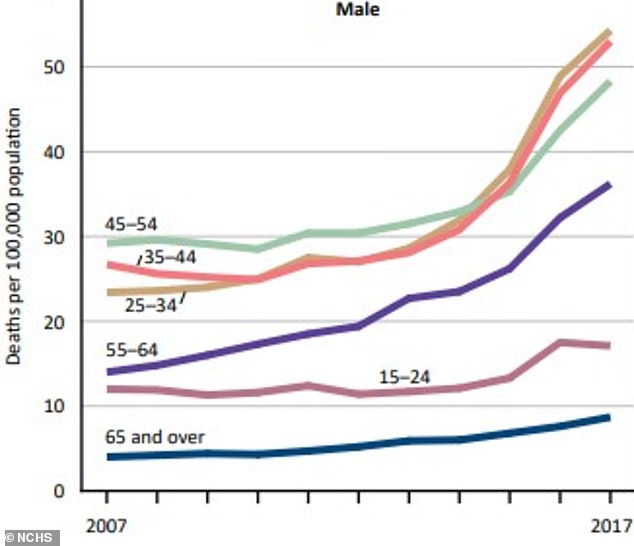 Deaths from drug overdoses were about twice as common in 2017 as they had been in 2007, and increases among young men have been particularly steep (gold, pink and green), rising about 18.5% year-over-year for that decade

In 2017, the rate of deaths attributed to drug overdoses was about twice as high as it was in 2007.

Recent reports have found an uptick in overdose deaths among black Americans, but the deaths of poor white men in the US continue to make up a disproportionate number of deaths.

And that, as a result has driven down life expectancy for this group in particular and the US as a whole.

There is some good news: the tide of the opioid epidemic may at last be turning.

The opioid epidemic is thought to have reached its peak in 2017.

By last October, US Department of Health and Human Services Secretary Alex Azar proclaimed that the epidemic was far from over, but that it might finally be starting to ebb.

The end of 2017 and beginning of 2018 saw the first downturns in overdose deaths since the epidemic began.

Health officials – and white men – can hope that perhaps as these deaths become less common, men who live longer than 76.1 years may become more common.