Scientists have discovered that anthrax may be the key to a better, faster treatment for bladder cancer.

A combination of the anthrax bacterium – the same one used in a slew of 2001 biological terror attacks against American politicians and media figures – and a growth factor attacks tumor cells while leaving healthy ones alone, according to Purdue University’s breakthrough new research.

Bladder cancer is one of the most expensive forms to treat, in part because it tends to recur.

Plus, current treatments for the disease are painstakingly slow and, in their tests on dogs for whom all other bladder cancer treatments had failed, the anthrax treatment took just minutes. 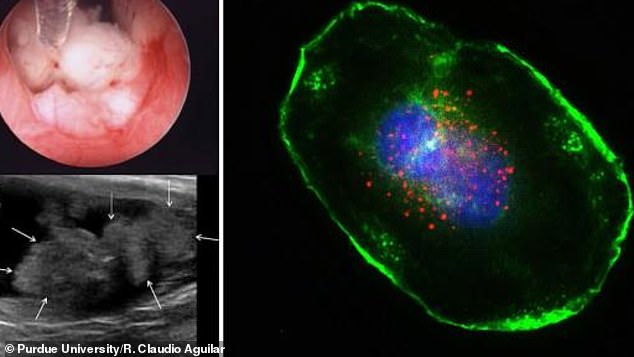 Bladder tumors (left) often recur, driving up treatment costs. A new study used a growth factor to target bladder cancer cells (red) with anthrax to kill them while preserving healthy bladder cells in dogs that had failed all other treatments, a new study reports

Bladder cancer strikes about 72,000 people in the US every year. Some 16,000 a year lose their lives to the cancer.

It’s not clear if the disease still holds this distinction, but as recently as as 2017, bladder cancer was the single most expensive form of the disease to treat in the US.

The annual cost of managing bladder cancer that year ran between a whopping $96,000 and an eye-watering $187,000 per person, according to a research letter in Clinical Advances in Hematology and Oncology.

The good news attached to those price tags is that costs are driven up in part by the fact that survival rates for bladder cancer are good.

That means patients have to be checked and monitored closely and consistently after their first diagnoses.

And the majority of those patients will need more treatment.

Altogether, recurrences account for about 60 percent of an individual’s bladder cancer treatment.

Most people respond well to treatment, but treatment takes a long time and responses last only a short while.

Perhaps because its survival rates are good, little progress or change has made to treatment regimens for bladder cancer for years.

That’s not to mention the treatment itself. Most patients have to have one or several sessions of chemotherapy, during which the drugs are pumped into the bladder where they sit for one or two hours.

Patients may have to shift positions to make sure the potent chemicals coat the interior of their organs sufficiently, and may go home feeling like thy have a bad bladder infection.

The word ‘anthrax’ conjures panic as Americans picture the envelopes with white powder that were delivered to politicians and media members in the weeks following the World Trade Center attacks on September 11, 2001.

Anthrax is actually the name of the infection caused by bacteria called Bacilus anthracis.

It occurs naturally in soil but when ingested or inhale by people in high enough doses, it can cause life-threatening illnesses.

On October 5, 2001, Bob Stevens, of American Media in Florida became the first in the US to die of anthrax poisoning at 63.

But in controlled settings, the bacterium can be used for good, the Purdue study suggests.

Healthy bladder cells have an exterior coating, like an armor.

Bladder cancer cells, on the other hand, are exposed, and ‘overexpress’ epidermal growth factor receptor (EGFR), meaning their surface bears many receptors waiting for the growth factor.

So scientists at Purdue gave the anthrax bacteria a version of the growth factor that instructed it to go find its matching receptor.

Because the anthrax was armed with this, it ignored the health bladder cells and went straight for the cancer and poisoned them.

They tested this theoretical treatment on rats, dogs that had run out of alternative treatment options and human tumor cells in the lab, the results were astonishing.

With a single treatment of as little as three minutes, the anthrax treatment started killing cancer cells.

And in the dogs, that one treatment shrunk tumors by an average of 30 percent.

In animals without the disease, the treatment was toxicity free, meaning its side effects are likely limited.

‘It is fast and effective, both of which are critical for people dealing with this devastating disease.’