Cannabis does NOT help people quit opioids despite hopes legalising the drug would reduce US addiction crisis, study claims

Medicinal cannabis is not effective at helping people come off powerful opioids, according to researchers.

Marijuana advocates claim the drug can reduce people’s reliance on the addictive painkiller drugs and even help addicts recover.

Scientists claim opioid prescriptions went down in states which legalised cannabis, with suggestions it is just as good of a painkiller.

But research has now debunked the unproven claims, with experts saying there is no proof using cannabis makes people less likely to take opioids. 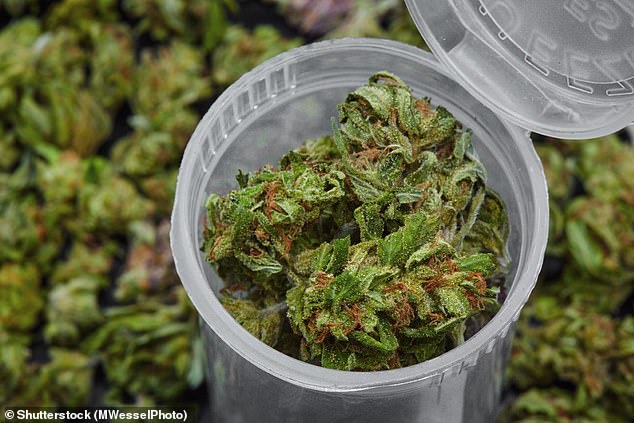 Using cannabis during a methadone opioid-withdrawal program did not increase someone’s chances of succeeding and did not reduce how many opioid drugs people took, according to research (stock image)

‘There is limited evidence that cannabis use may reduce opioid use in pain management,’ said Dr Zainab Samaan, from McMaster University in Hamilton, Ontario.

‘And some high-profile organizations have suggested cannabis is an “exit drug” for illicit opioid use.

‘But we found no evidence to suggest cannabis helps patients with opioid use disorder stop using opioids.’

OPIOIDS IN AMERICA: BY THE NUMBERS

Opioid prescriptions are going down across the US, but overdoses are not.

Last year, the rate of opioid overdose deaths hit a record high, with around 200 Americans dying every day, according to new figures, published by the DEA in July.

US Health Secretary Alex Azar insists the tide has turned this year.

However, doctors warn the boom in prescriptions flooded the market with unused pills, some of which may have made it onto the black market.

An in-depth analysis of 2016 US drug overdose data shows that America’s overdose epidemic is spreading geographically and increasing across demographic groups.

Nearly two-thirds of these deaths involved a prescription or illicit opioid. Overdose deaths increased in all categories of drugs examined for men and women, people ages 15 and older, all races and ethnicities, and across all levels of urbanization.

The Orange County Health Agency found that there has been an 88 percent of drug overdose deaths between 2000 and 2015.

Half of those deaths were due to accidental prescription drug overdoses. Seven out of every 10 overdose deaths between 2011 and 2015 involved opioids.

They are among the strongest painkillers in the world and the US is currently in the grip of a prescription medication addiction crisis with millions hooked on them.

Research had suggested that legalising marijuana would lead to fewer opioid prescriptions and a lessening of addiction.

A study published in the journal JAMA Internal Medicine, for example, found that the number of opioid prescriptions filled under Medicare Part D fell by 2.21million doses per year in states where medical marijuana became available.

But Dr Samaan and her colleagues reviewed six studies of more than 3,600 people looking at effects of cannabis use during methadone maintenance therapy, and found different groups of people appeared to be affected.

Methadone has similar effects to heroin but is weaker and is used to help wean addicts off the stronger drug without such extreme withdrawal symptoms.

In their review the team found people using cannabis during withdrawal treatment did not use fewer opioids.

It also did not make them any more likely to stick out treatment until the end.

The research was published in the Canadian Medical Association Journal.

It follows a study published by Columbia University in the summer which analysed survey results from some 70,000 Americans.

Data showed that people who had started using medical marijuana after it was legalised did not tend to be the same people who were abusing opioid drugs.

Dr Silvia Martins, an epidemiologist at Columbia, said at the time: ‘The hypothesis generated from these studies is that after medical marijuana law enactment, health care professionals would be more likely to prescribe medical marijuana instead of opioid medications, this, in turn, would reduce the chance of individuals to misuse prescription opioids and develop consequences.

‘We tested this relationship and found no evidence that the passage of medical marijuana laws – even in states with dispensaries – was associated with a decrease in individual opioid use of prescription opioids for nonmedical purposes.’