Skip to content
Home > > Cleaning supplies may raise risks for lung diseases by up to 38%, study suggests – Daily Mail

Cleaning supplies may raise risks for lung diseases by up to 38%, study suggests – Daily Mail

Cleaning supplies may raise risks for lung diseases by up to 38%, suggests study of nurses who suffer higher rates of COPD

Inhaling cleaning products may raise risks for chronic lung diseases by up to 38 percent, a new study suggests.

Cleaning supplies such as alcohol, peroxide and bleach are common in most households and key to killing germs, especially in hospitals, where nurses must keep spaces sanitary for the sake of their patients’ safety.

But the harsh chemicals are meant for sterilizing surfaces and frequently breathing them can be damaging to the lung tissue.

The latest – and largest – study to-date, conducted by researchers at the University de Versailles and Harvard University found that nurses who spent years around the chemicals face higher risks for the group of lung conditions known as chronic obstructive pulmonary disease (COPD). 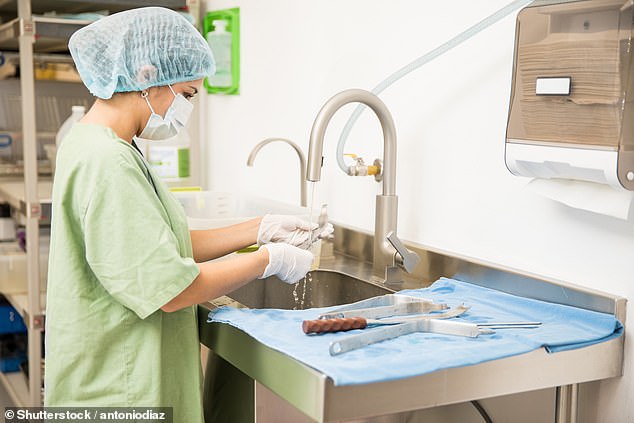 COPD, a catchall name for a handful of diseases, most commonly chronic bronchitis and emphysema, is mostly thought of a smoker’s disease.

About 16 million people in the US suffer COPD, which makes breathing difficult.

Alongside other other lung and respiratory conditions, COPD is the fourth leading cause of death in the US.

The best way to reduce risks for COPD is to never smoke, or quit if you’ve started.

But everything we breathe in affects our lung and airway health.

WHAT IS CHRONIC OBSTRUCTIVE PULMONARY DISEASE?

Chronic obstructive pulmonary disease (COPD) describes a group of lung conditions that cause the airways to narrow and become inflamed.

Examples include bronchitis, which affects the airways, and emphysema, which impacts the air sacs.

This makes it harder to move air in and out as you breathe.

Around 1.2million people in the UK are diagnosed with COPD, British Lung Foundation statistics show.

And in the US, 16million people suffer from COPD, according to the Centers for Disease Control and Prevention.

It usually develops due to long-term damage to the lungs from smoking or air pollution.

Jobs where people are exposed to fumes, dust and chemicals also raise the risk.

In severe cases, sufferers lose their appetite, have swollen ankles, lose weight and may even cough up blood.

COPD is incurable and the damage to the lungs cannot be reversed.

Patients should also quit smoking and maintain a healthy weight.

These substances are corrosive, irritating the eyes, throat and lungs, as well as causing headaches.

But it’s not just the immediate burning and headaches from using too much bleach or Windex – repeated exposures may do long-term harm.

To investigate how these chemicals might affect COPD risks, researchers at Harvard and the University of Versailles followed a group of well over 73,000 nurses, beginning in 1989 and following up with them via surveys every two years since.

They’d seen in previous studies that people who cleaned professionally had higher risks of both asthma and death from COPD.

Heavy-duty, thorough cleaning is particularly important in heath care settings, meaning that nurses might be put in harm’s way by doing their best to keep their patients safe.

The scientists tracked how much formaldehyde, glutaraldehyde, bleach, hydrogen peroxide, alcohol, ammonium and enzyme cleaning products the nurses were exposed to.

They found that those that were often exposed to those chemicals were between 25 percent and 36 percent more at-risk of developing COPD.

As a result, an estimated 40 to 70 percent of them would not survive longer than five years after diagnosis, depending on how severe their disease was.

The study authors suggest that the cleaning products may damage the lung lining and cause oxidative stress, a kind of cellular damage that can cause inflammation.

Interestingly, enzymatic cleaners – which contain ‘good’ bacteria and are primarily used to clean fat and oil and to eliminate odors such as those from urine – don’t seem to have the same irritant effects or raise COPD risks, the study found.

They concluded: ‘There is a biological plausibility that long-term exposure to irritant disinfectants and cleaning agents could contribute to persistent airway damage and COPD [development].’