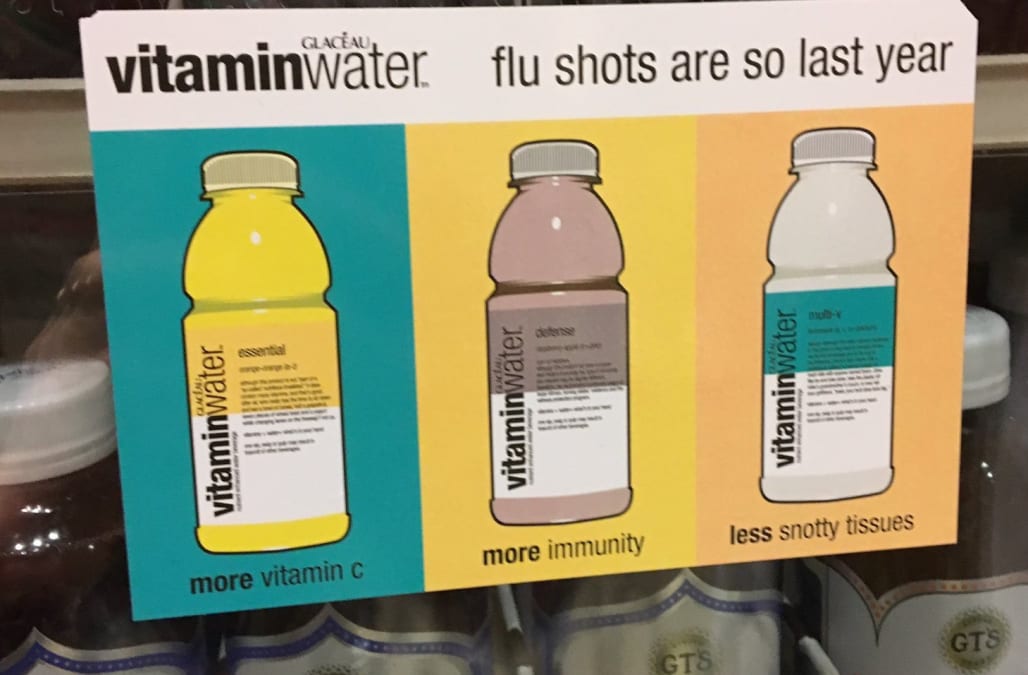 A 2011 Vitaminwater ad is making the rounds on social media again, prompting renewed cries against the company for its “irresponsible” marketing practices.

The colorful advertisement in question depicts three bottles of Vitaminwater in different flavors and touts the beverage’s alleged health benefits, such as “more immunity” and “less snotty tissues.”

Dubious health claims aside, it’s the tagline of the ad that really seems to have people angry.

“Flu shots are so last year,” the poster asserts, implying Vitaminwater can perhaps stave off the often-deadly disease as well as a vaccination can.

Although the promotion is nearly a decade old, that didn’t stop people on Twitter from recirculating an image of the ad in horror.

“Someone please tell me this isn’t real,” one man wrote, urging consumers not to take health advice from “Snapple fridge doors” and, instead, consult their physicians. “Flu shots save lives. Vitamin water does not.”

“This is irresponsible marketing,” wrote another man, who tagged the company in his message.

A Vitaminwater spokesperson confirmed to In The Know that the ad in question has not been in circulation since 2011.

“This ad was done in poor taste and should have never been issued,” the representative added.

When the ad was first released, the National Consumers League (NCL) slammed Glaceau, the maker of Vitaminwater, calling on the Federal Trade Commission (FTC) to intervene and prevent it from making such “dangerously misleading” claims.

“These advertising claims are not only untrue; they constitute a public health menace,” NCL executive director Sally Greenberg said at the time. “Stopping these Vitaminwater claims, which contradict information by the Centers for Disease Control (CDC) and other public health authorities, should be a top FTC priority.”

The CDC recommends everyone 6 months of age and older get vaccinated every flu season (which roughly begins in November each year and can last as late as May), as multiple strains of the influenza virus, constantly changing, make their way across the world. Each year, a new flu vaccine is made to protect against three or four viruses that are likely to cause illness in the upcoming flu season, the agency notes.