A 37-year-old Australian father of two is warning others to undergo a routine skin check after losing a large chunk of flesh on his back and neck to melanoma.

Ryan Glossop, of Perth, was diagnosed with melanoma in November 2018 after noticing a seemingly innocuous “sunspot” on the back of his neck. Four surgeries and nearly a year later, he has only recently been given the all-clear.

“Each and every time his marker came back [abnormal] and being told they need[ed] to remove more, I felt sick,” Fallon Glossop, Ryan’s wife, told Fox News. “I can’t really explain that feeling, but it’s something I would never want to go through again.”

Each surgery required more and more of the skin on the man’s upper back and neck to be removed. In May, during his fourth and most recent surgery, so much was taken that Ryan required a skin graft to cover the affected area. Surgeons used skin from the back of his legs to replace what they took. 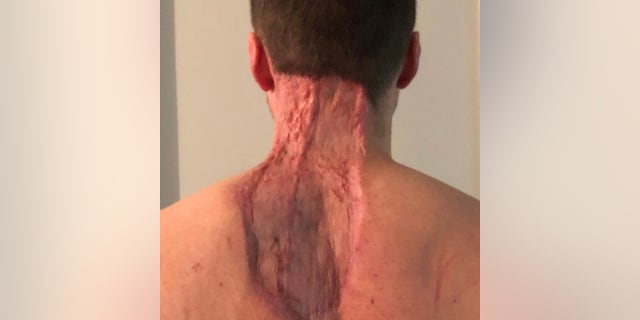 A large area of skin was removed from Ryan’s back and neck.
(Fallon Glossop)

In total, an area about 3 inches wide and 15 inches long was removed.

A skin condition called Nevus Spilus led Ryan to develop melanoma, Fallon, 32, wrote in an Oct. 3 Facebook post detailing her husband’s cancer journey. As of this writing, the post had more than 1,200 reactions and about 3,000 shares.

“This whole experience has been hugely challenging for all of us, but if anything good is to come out of this, it is that we now want to help raise more awareness of skin cancer,” she wrote at the time. 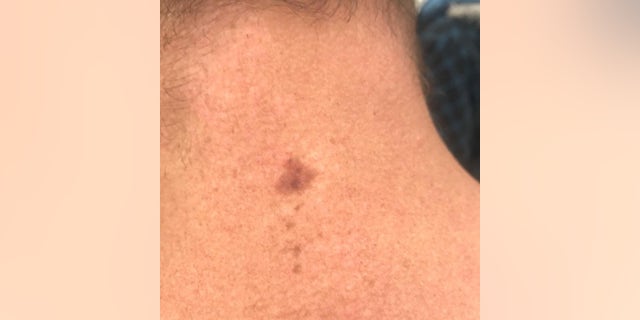 The spot on the back of Ryan’s neck that was later determined to be cancerous.
(Fallon Glossop)

Ryan’s diagnosis rocked the young family of four (the couple has two children together, an 8-year-old boy and a 4-year-old girl).  But Fallon was resolute and unwavering when supporting her partner throughout his cancer journey.

“I knew I needed to be strong and let Ryan know that I was coping fine so I could help him through it. He not once complained and stayed so brave throughout,” she said, noting she admired Ryan’s strength “so much.”

“We kept positive the whole time for our kids, and let them know that it was always OK to ask questions,” she added. 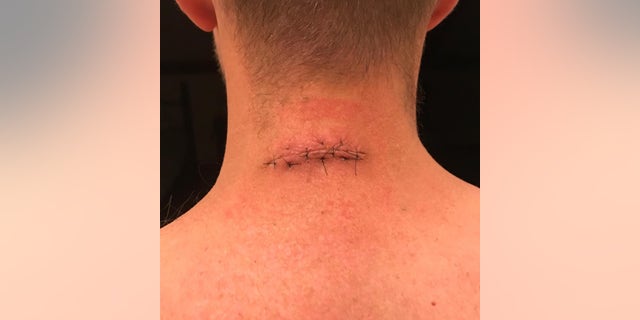 Ryan’s neck after one of his initial surgeries.
(Fallon Glossop)

Ryan told the Daily Mail that his diagnosis was “scary,” but he was relieved when doctors told him he would likely be cancer-free following his fourth surgery.

After that, “it was more dealing with the fact I’d have fairly significant scars,” he said. He will likely require reconstructive surgery, Fallon said.

In the U.S., skin cancer is the most common type of cancer, according to the American Academy of Dermatology, which notes more than 1 million Americans are living with melanoma. 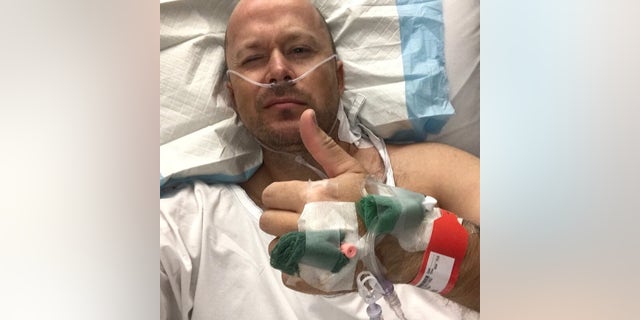 Ryan in the hospital.
(Fallon Glossop)

Skin cells are damaged when exposed to ultraviolet (UV) light, which is present in both the sun and tanning beds.

“The majority of melanoma cases are attributable to UV exposure,” the academy states, noting melanoma rates among men may be higher due, at least in part, to generally lower rates of sun protection.

“I wasn’t going to post anything about my experience over the past year, however, I’m convinced after the response of my wife’s recent post that if I don’t, I’m missing an opportunity to motivate at least one person to have skin scan and potentially save a life,” he wrote, noting that a friend was the first to point out his “suspect mole” and encouraged him to get it checked out.

“Fortunately for me, the rest is in the past and I’m moving forward. But please feel free to share and please… have a skin check!” he added.