A deadly disease spread by shrews has been killing humans for decades and going unnoticed, according to scientists.

Doctors say at least 14 patients in Germany have died from encephalitis caused by Borna disease virus 1.

But it is feared the total could be much higher, given the shrews that carry the bug are found in Austria, Switzerland and Liechtenstein.

Experts are now calling for more research into the spread of the virus, to work out if it really is behind even more unexplained human deaths.

Encephalitis makes the brain swell up and can cause a fever, headache, vomiting, seizures, limb weakness and loss of consciousness. 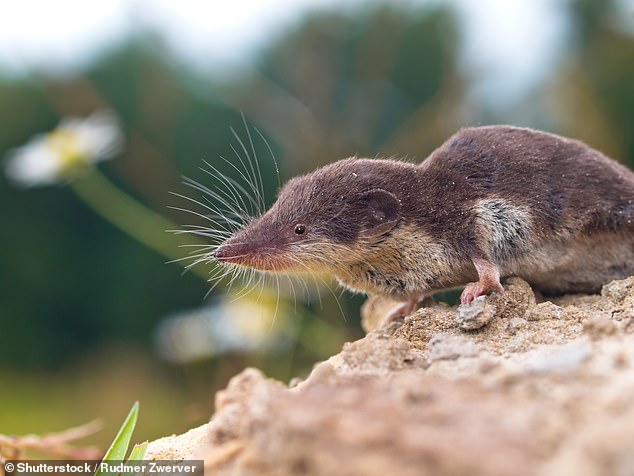 The Borna disease virus is carried by bi-coloured white-toothed shrews in Germany, Austria and Switzerland, and can cause serious illness in horses, sheep and humans if they contract it, according to scientists (stock image)

Experts at Regensburg University Hospital in Germany studied the medical records of 56 people who died between 1999 and 2019.

The group all had encephalitis and lived in in the south of Germany, where the Borna disease-carrying bi-coloured white-toothed shrews roam naturally.

Eight of them were found to have Borna disease virus 1, bringing the confirmed total of human cases to 14.

Six older cases of Borna virus were not dated but were diagnosed in the same region and only one of them recovered.

The eight new patients all died within two months of being diagnosed with encephalitis, which affects around 6,000 people each year in the UK and 25,000 in the US.

Their illnesses tended to begin with a fever, headache and confusion, and progress to unsteady walking, memory loss, seizures, deep coma and eventually death.

The others had encephalitis which stemmed from other causes – viruses such as herpes, measles, mumps and rubella may also cause the deadly brain illness.

Professor Barbara Schmidt, one of the researchers, said: ‘Our findings indicate Borna disease virus infection has to be considered a severe and potentially lethal human disease transmitted from a wildlife reservoir. 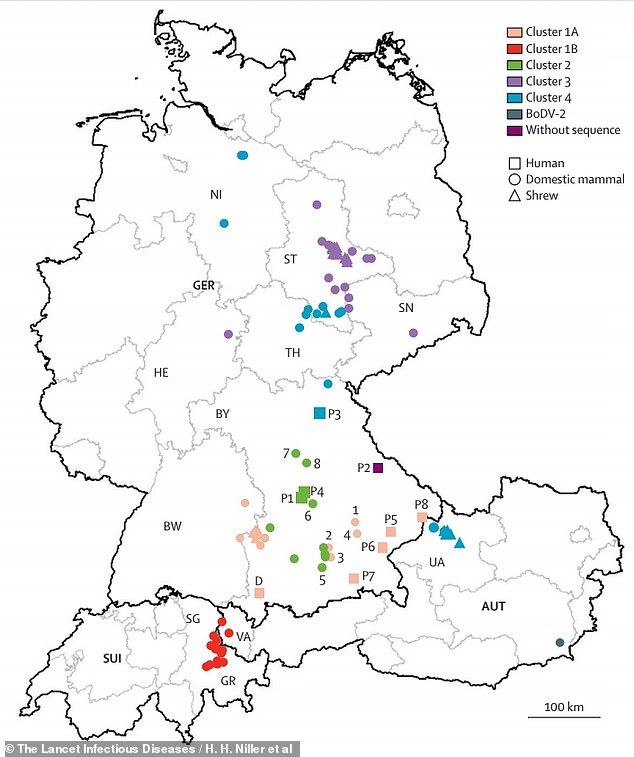 The virus was recorded in shrews and pet animals – believed to be cats – across Germany, Switzerland and Austria, with all eight human cases in the study found in the south of Germany (human cases shown as squares)

Encephalitis is an uncommon but serious condition in which the brain becomes inflamed (swollen).

It can be life-threatening and requires urgent treatment in hospital.

Anyone can be affected, but the very young and very old are most at risk.

Encephalitis sometimes starts off with flu-like symptoms, such as a high temperature and headache, but these don’t always occur.

More serious symptoms develop over hours, days or weeks, including: confusion or disorientation, seizures (fits), changes in personality and behaviour or loss of consciousness.

Dial 999 for an ambulance immediately if you or someone else has these more serious symptoms.

It’s not always clear what causes encephalitis, but it can be caused by viral infections. Several common viruses can spread to the brain and cause encephalitis in rare cases, including the herpes simplex virus (which causes cold sores and genital herpes) and the chickenpox virus.

‘However, it’s not a newly-emerging disease, but one that appears to have occurred unnoticed in humans for at least decades.’

She added it ‘may have caused other unexplained cases of encephalitis in regions where the virus is endemic in the host shrew populations’.

‘Our tests bring the total number of reported cases of human Borna disease virus in southern Germany to at least 14,’ said Professor Martin Beer, one of the authors.

‘So it is still relatively rare in absolute numbers, but it might be behind a larger proportion of unexplained severe to fatal encephalitis cases.

‘Only more tests on patients with severe or even deadly encephalitis will find this out.’

He added that ‘earlier detection might be possible using serum and cerebrospinal fluid samples from living patients’.

Although the effects of Borna disease on humans are not well documented, it can cause similar symptoms AS WHAT? and also anxiety, mania, psychosis and depression, according to scientists.

The study does not mention any deaths in Austria, Switzerland and Liechtenstein, where the white-toothed shrews are also found.

The researchers suggest the virus may travel to humans through pet cats.

In at least seven of the 14 deaths, the patients had had close contact with pet cats – the scientists suggest cats may bring infected cats into the home after hunting them.

They also said living in rural areas, agricultural work or outdoor activities appeared to be common to the patients who had died.

The same virus is also found in sheep and horses, but all cases of the disease can be traced back to shrews, which are its natural host.

Most of the patients reported contact with cats, whereas only one said they had been near horses.

The research was published in the medical journal The Lancet Infectious Diseases.