Diabetes is TWICE as common in Asian and Hispanic Americans as the disease is among the US population, CDC says

By Natalie Rahhal Acting Us Health Editor For Dailymail.com

Diabetes is nearly twice as common among Latinx and Hispanic Americans as it is among the general US population, according to new Centers for Disease Control and Prevention (CDC) figures.

Both type 1 and type 2 diabetes stunt life expectancy and quality of life, making it the seventh leading cause of death in the US.

But it strikes different sub-populations of Americans at very different rates. As the Hispanic, Latinx and Asian communities grow in the US, CDC officials examined rates of diabetes in these groups in an effort to improve early prevention practices.

They found that a quarter of Mexicans have diabetes, as well as over 20 percent of Puerto Ricans, Cubans and Dominicans and 23 percent of South Asian people living in the US have diabetes. 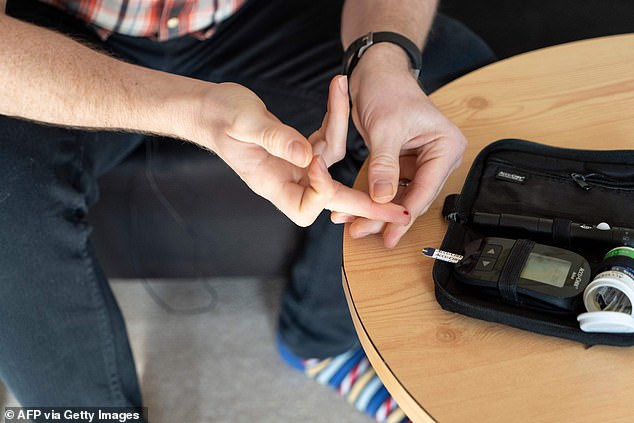 New estimates from the CDC suggest that over 20% of Hispanic and Asian people in the US have diabetes, meaning they need to closely monitor their blood sugar through blood tests (pictured, file)

‘This defined data on the prevalence of diabetes among Hispanic and Asian demographic groups can help healthcare providers and patients reduce the risk for type 2 diabetes.’

An estimated 1.4 million cases of diabetes are diagnosed each year in the US.

Another 8.1 million people are estimated to be living with the disease unwittingly.

The vast majority – 90 to 95 percent – of diabetes cases are type 2, a preventable form of the disease that develops when a person become insulin resistant over the course of their lives.

In the US, about 9.4 percent of the general population has diabetes.

But rates skyrocket as weights go up.

Being obese or overweight is a leading risk factor for diabetes.

So groups that tend to have poor diets, high body mass indices (BMIs) and lower levels of physical activity.

Tracking how the US population is changing and how disease rates are shifting among its subgroups is an important tool for US health officials to target groups and instruct doctors on who needs to be watched closely for various conditions.

Currently, Asian, Hispanic and Latinx Americans collectively account for 23 percent of the US population, according to the CDC’s estimate.

So, for the first time, CDC scientists assessed data collected between 2011 and 2016 that monitored both diagnosed diabetes and information the research team could assess to determine the odds someone of Asian or Hispanic decent had an undiagnosed case of the disease.

According to their latest numbers, 12 percent of white Americans have diabetes.

By comparison a full quarter of Mexicans have the disease as do 22 percent of Puerto Ricans and 19 percent of Cubans and Dominicans living in the US.

Rates were slightly lower among Central and South Americans, at 19 percent and 112 percent, respectively.

Among Asian populations, East Asians are at the lowest risk for East Asians, only 14 percent of whom are estimated to have the diabetes.

Notably, Asians broadly have lower BMIs than the general population, but can be at risk for diabetes even at normal BMIs.

The CDC advises now advises that doctors test patients of Asian decent for diabetes if their BMIs are 23 or higher, as opposed to the 25 or higher threshold for the general population.

‘These important findings establish a baseline for future national diabetes estimates for Hispanic and non-Hispanic Asian subgroups and highlight differences in the diabetes burden in these groups,’ said Dr Ann Albright, director of the CDC’s Division of Diabetes Translation.

‘These data also provide insights that allow us to reach groups at higher risk and provide opportunities to strengthen diabetes detection and type 2 diabetes prevention and care in these groups.’