Peter Scott-Morgan, 61, decided to challenge what it meant to be human when he refused to accept his fate following a diagnosis of motor neurone disease in 2017.

He said he wanted to push the boundaries of what science can achieve so decided to extend his life and become fully robotic.

And this week the world-renowned roboticist returned to his home in Torquay, Devon, after 24 days in intensive care, with all medical procedures now complete and able to begin his re-booted life.

But the evolution of his machine-like existence doesn’t end there — and he joked he had more upgrades scheduled than Microsoft. 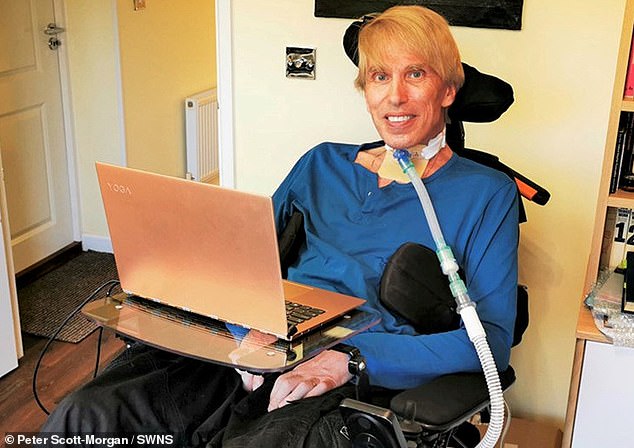 A terminally-ill British scientist, pictured, who is dying from a muscle wasting disease says has fully completed his transition into the world’s first full CYBORG — called ‘Peter 2.0’

The world-renowned roboticist has had to undergo a series of incredibly complex and risky operations during his journey.

This has included developing a remarkably life-like avatar before he lost any of the muscles in his face used to create expressions.

Dr Scott-Morgan is also exploring the use of eye-tracking technology to enable him to control multiple computers using only his eyes.

And the final procedure in his robot transition saw him successfully trade his voice for potentially decades of life.

He underwent a laryngectomy, meaning he lost his physical voice, but in doing so, he will avoid the added danger of saliva potentially entering his lungs, due to his condition.

Dr Scott-Morgan had previously labelled this treatment as the end of Peter 1.0 and the start of Peter 2.0.

He confirmed the news on social media this week alongside a picture and a message that ‘Peter 2.0 is now online.’

He wrote: ‘Just home from 24 days in Intensive Care.

‘All medical procedures now complete and a huge success. My mini-ventilator keeping me breathing is a LOT quieter than Darth Vader’s.’

‘All speech is synthetic but at last sounds like me again. Long research road ahead but in great spirits.’

It was Peter’s first message to his legion of followers since he signed off last month what he described as his ‘last post as Peter 1.0.’

HOW DID HE BECOME A CYBORG? 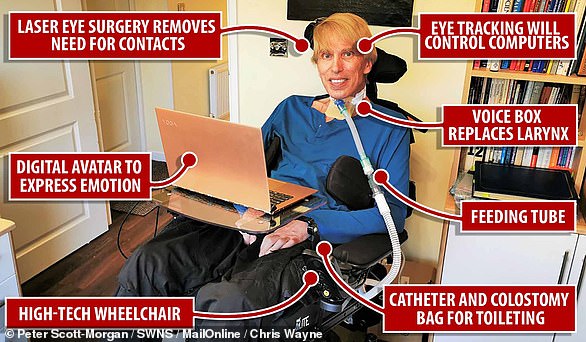 Roboticist Peter Scott-Morgan has undergone many changes on his journey

Peter Scott-Morgan has undergone a complex journey to extend his life in the face of motor neurone disease. 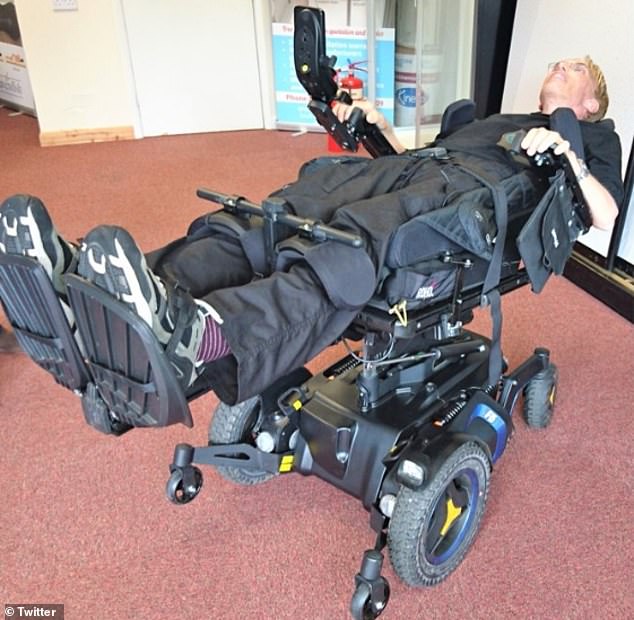 Dr Scott-Morgan shared the picture with the caption: ‘CORE OF CHARLIE (my Cyborg Harness And Robotic Locked-In Exoskeleton), the brilliantly engineered Permobil F5 Corpus VS. As a top-end wheelchair, it stands, lies flat, rises, goes fast. Soon, with lots of added robotic hi-tech, it’ll boldly go where no wheelchair has gone before!’

He confirmed that on October 10 he would be trading his voice for ‘potentially decades of life’ as he completed the final medical procedure for his transition in the same month he was told that statistically he would be dead.

He added: ‘I’m not dying, I’m transforming. Oh, how I love science.’

Dr Scott-Morgan, of Torquay, Devon, has throughout his career been granted ‘unparalleled confidential access’ to government organisations, banks and major corporations.

He has been using this scientific expertise to work with cutting-edge technology experts to become Peter 2.0.

‘And when I say “Cyborg”, I don’t just mean any old cyborg, you understand, but by far the most advanced human cybernetic organism ever created in 13.8 billion years.’

‘Almost everything about me is going to be irreversibly changed – body and brain.’

‘It goes without saying that all my physical interaction with the world will become robotic. And naturally, my existing five senses are going to be enhanced. But far more importantly, part of my brain, and all of my external persona, will soon be electronic – totally synthetic.’

‘From then on, I’ll be part hardware / part wetware, part digital / part analogue.’ 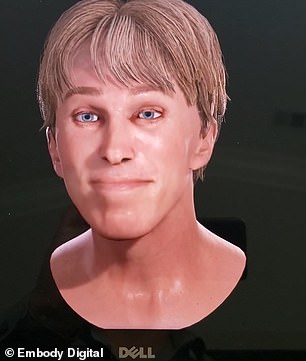 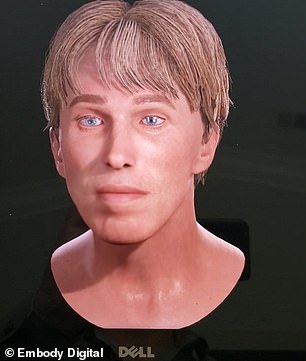 ‘And it won’t stop there; I’ve got more upgrades in progress than Microsoft. Mine isn’t just a version change. It’s a metamorphosis.’

The scientist has also been exploring eye-tracking technology, to enable him to control multiple computers using just his eyes.

Among other things, this would mean he could control his own electronic bed and a hoist to help him move.

This eye-tracking technology, means that he could no longer wear contact lenses, and so he has undergone laser eye surgery to enable him to have perfect vision at 70cm- the distance from his computer screen.

The scientist also has a remarkable top-end wheelchair, which he said on Twitter is ‘brilliantly engineered’ and allows him to stand, lie flat and go fast. 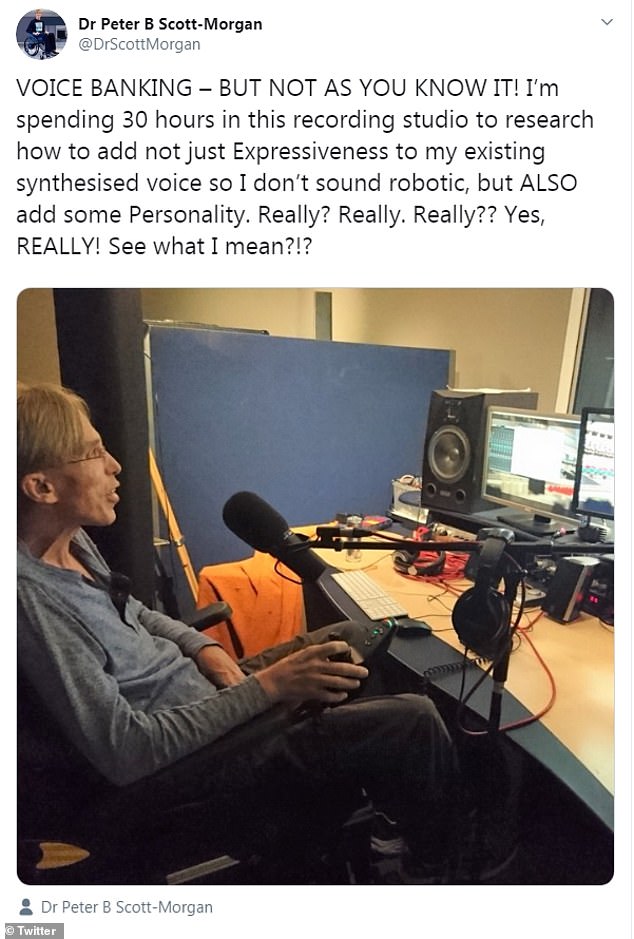 He has undergone further pioneering surgery in what he believes to be the first ever operation of its kind, to insert a feeding tube directly into his stomach, a catheter directly into his bladder and a colostomy bag directly onto his colon.

These procedures will help him to deal with any potential feeding and toileting problems, helping him to maintain his independence.

However, he stressed online that this is an incredibly risky procedure for somebody with MND.

Despite the risks of operations and being terminally ill, Dr Scott-Morgan says he is not interested in how to survive his condition, he intends to ‘thrive.’

He remains positive and often, humorous, seeing his situation as a chance to truly embrace scientific capabilities. 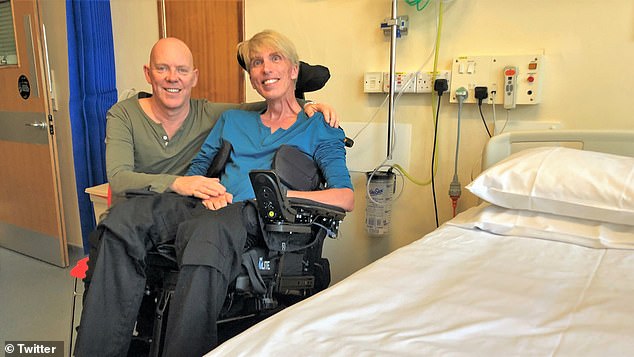 Dr Peter Scott-Morgan, 61, with his husband Francis. Dr Scott-Morgan shared the photo on social media with the caption: ‘This is my last post as Peter 1.0. Tomorrow I trade my voice for potentially decades of life’

In fact, the Scott-Morgan Foundation which he set up with his husband, Francis, seeks to use artificial intelligence, robotics and other high-technology systems to transform the lives of those ‘restricted by age, ill-health, disability, or other physical or mental disadvantage.’

On his website Dr Scott-Morgan said this vision is far from just a dream: ‘We are within touching distance of changing – everything. I’m not dying – I’m transforming!’

‘This is terminal disease like you’ve never seen it before. And as far as I’m concerned, bring it on.’

‘MND hasn’t even begun to bring me to my knees. And even long after I’m locked In, I will still be standing tall.’ 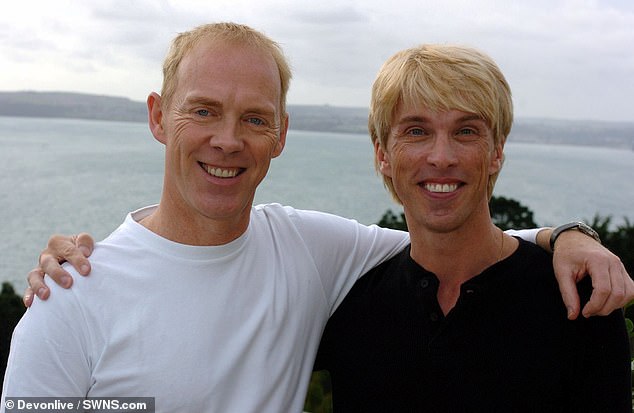 The Scott-Morgan Foundation which Peter, right, set up with his husband Francis, left, seeks to use artificial intelligence, robotics and other high-technology systems to transform the lives of those ‘restricted by age, ill-health, disability, or other physical or mental disadvantage.’

‘Thanks to HiTech – I will talk again. I will convey Emotion and Personality. And I’ll reach out and touch the people I love. And I will not be the only one.’

‘Over time, more and more with MND, with extreme disability, with old age, with a passion simply to break free from their physical straight-jacket, will choose to stand beside me.’

‘Because we refuse simply to “Stay Alive”. We choose to thrive.’

WHAT IS MOTOR NEURONE DISEASE (ALS)?

The NHS describes motor neurone disease (MND) as: ‘An uncommon condition that affects the brain and nerves. It causes weakness that gets worse over time.’

It was first discovered in 1865 by a French neurologist, Jean-Martin Charcot, hence why MND is sometimes known as Charcot’s disease.

However, according to Oxford University Hospitals: ‘Nearly 90 per cent of patients with MND have the mixed ALS form of the disease, so that the terms MND and ALS are commonly used to mean the same thing.’

Slurred speech is an early symptom and may later worsen to include difficulty swallowing food.

Muscle cramps or twitches are also a symptom, as is weight loss due to leg and arm muscles growing thinner over time.

MND is difficult to diagnose in its early stages because several conditions may cause similar symptoms. There is also no one test used to ascertain its presence.

However, the disease is usually diagnosed through a process of exclusion, whereby diseases that manifest similar symptoms to ALS are excluded.

The NHS says that MND is an ‘uncommon condition’ that predominantly affects older people. However, it caveats that it can affect adults of any age.

The NHS says that, as of yet, ‘it is not yet known why’ the disease happens. The ALS Association says that MND occurs throughout the world ‘with no racial, ethnic or socioeconomic boundaries and can affect anyone’.

It says that war veterans are twice as likely to develop ALS and that men are 20 per cent more likely to get it.

There is no cure for MND and the disease is fatal, however the disease progresses at different speeds in patients.

People with MND are expected to live two to five years after the symptoms first manifest, although 10 per cent of sufferers live at least 10 years.

Occupational therapy, physiotherapy and medicines such as riluzole are used to palliate the effects of the the disease.

Lou Gehrig was a hugely popular baseball player, who played for the New York Yankees between 1923 and 1939. He was famous for his strength and was nicknamed ‘The Iron Horse’

As well as being known as ALS and Charcot’s disease, MND is frequently referred to as Lou Gehrig’s disease.

Lou Gehrig was a hugely popular baseball player, who played for the New York Yankees between 1923 and 1939.

He was famous for his strength and was nicknamed ‘The Iron Horse’.

His strength, popularity and fame transcended the sport of baseball and the condition adopted the name of the sportsman.

He died two years after his diagnosis.