This is not what they meant by “grabbing life by the horns.”

A U.K. man baffled doctors after a 5-inch cancerous “dragon horn” sprouted out of his back despite him having no history of skin cancer, according to a new study published in the British Medical Journal. 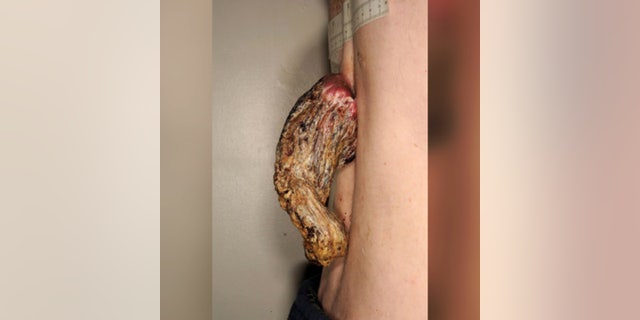 His growth was perplexing, as the patient had “no previous or family history of skin malignancy and was not immunosuppressed,” per the report. Not only that, but there weren’t any of the lymphatic abnormalities generally associated with such an aberration.

While most cutaneous cases are surgically nipped in the bud, this patient had allowed his tumor to blossom for three years — in effect making a mountain out of a malignant molehill.

As a result, the growth had to be excised by surgeons at the Countess of Chester Hospital, the BBC reports. The deficit tissue was then replaced with a skin graft from his thigh.

Although the operation was successful, the surprised BMJ study authors said the anomalous ailment only occurred because it was “neglected by a patient living in a developed country with access to free health care.”

“This highlights that despite current public skin cancer awareness and rigorous health care measures, cases like this can still arise and slip through the net,” wrote the quartet of Counter of Chester Hospital surgeons behind the case study.

This isn’t the first time an easily treatable condition snowballed out of control in 2019. This past Thanksgiving, an Indian man underwent surgery for a cystic kidney that had swelled to the size of a Butterball turkey. And in October, a Panamanian patient made headlines for his sports-bag-sized scrotum — the result of gangrene run amok.