Dozens of deaths linked to vaping could just be ‘the tip of the iceberg,’ a damning report has warned.

Scientists from the University of Texas have claimed the e-cigarettes inflict more damage to the lungs than previously feared.

X-rays of a 24-year-old vaper who had been smoking the devices daily lay bare alarming abnormalities, caused by fats from vaping oils found in his lungs.

For a week before the scan, the patient had been suffering shortness of breath, a cough, chest pain and fever. 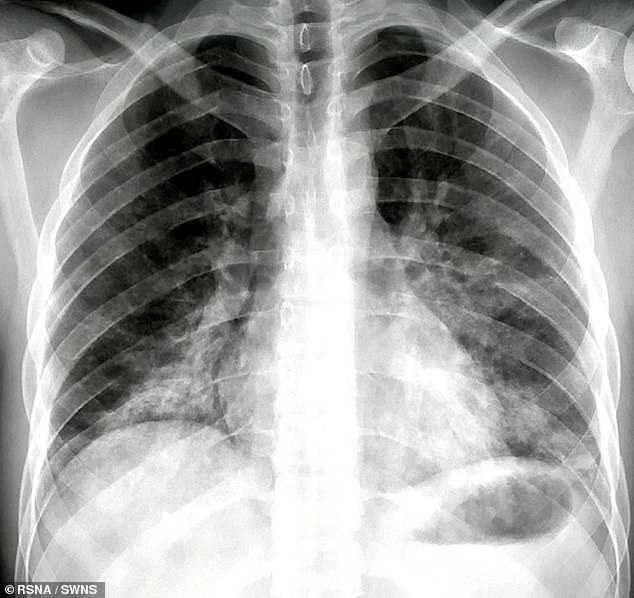 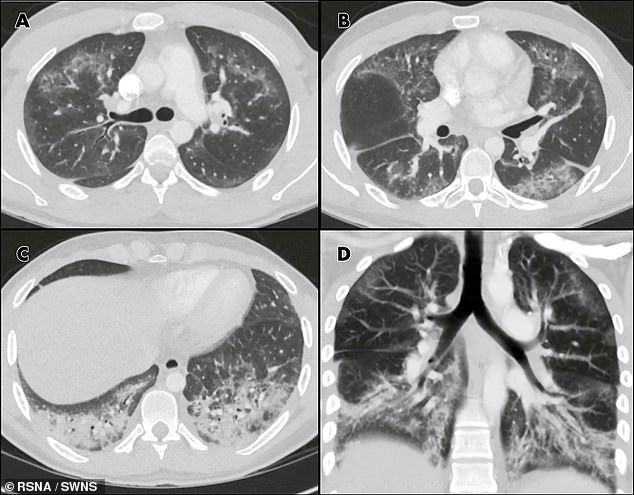 The man had been suffering shortness of breath, a cough, chest pain and fever for a week because of a build-up of vaping oils and fats in his lungs

He had a past history of asthma, adding to concerns e-cigarattes may be particularly dangerous for those with the breathing disorder.

Up to last week, 1,604 cases of lung injury associated with vaping had been reported across the US – with 34 resulting in death.

But these numbers likely underestimate the true incidence and prevalence of disease due to lack of recognition of e-cigarettes’ connection to disease.

The study, published in the journal Radiology: Cardiothoracic Imaging, is ominously titled ‘Electronic Cigarette or Vaping-associated Lung Injury (EVALI): The Tip of the Iceberg.’

Co-author Dr Suhny Abbara, of the University of Texas (UT), said: ‘Radiologists will continue to play an important role in recognising this emerging entity. 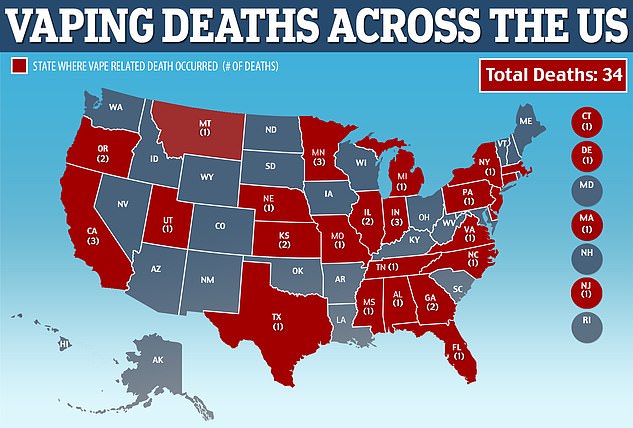 A total of 34 deaths from vaping-related illness have been reported in 24 US states (red) in the US. Every state but Alaska has confirmed at least one of the 1,604 cases of lung damage 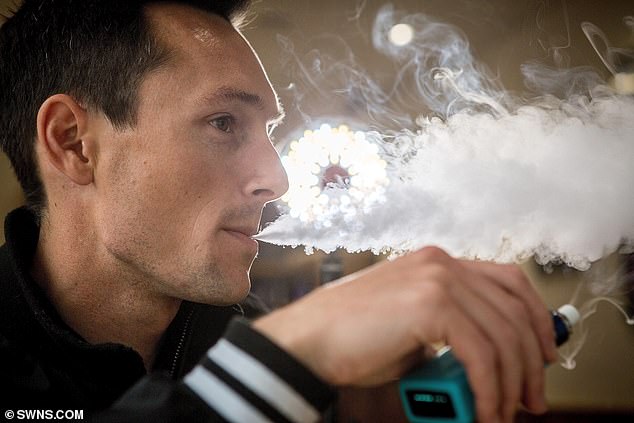 Vaping causes more damage to the lungs than previously feared, according to the latest research (file photo)

‘We encourage the medical imaging community to produce scientific evidence and medical knowledge to help advance our collective understanding of the effects of e-cigarette use on the lungs and other organ systems.’

The unnamed patient had been regularly using e-cigarettes – as well as tobacco and marijuana.

He had a high blood count, indicating disease. A dye injected into his blood vessels showed up large patches of white in his lungs.

WHAT IS KILLING VAPERS?

Cases have been reported in the majority of US states – 38, plus one territory.

Vitamin E acetate is suspected as a possible trigger for the disease.

But it’s only been found in THC vapes, which some, but not all, of the severely ill patients used.

This chemical may act like grease in the lungs, damaging the tiny sacs that fill with air.

In most, if not all, of these cases, what begins as shortness of breath and chest pain progresses to coughing, vomiting, fatigue, diarrhea, fever and weightloss.

Patients with the most severe cases wind up in the hospital with severely damaged lungs that often appear to be infected with pneumonia.

Sometimes they have to be placed on ventilators or in medically-induced comas.

The illness can rapidly progress, developing into what is called acute respiratory distress syndrome (ARDS).

ARDS is a life-threatening condition which means the lungs can’t provide the body’s vital organs with enough oxygen.

Illnesses are most common among men, who account for 72 percent of the confirmed cases.

Vaping-related illnesses have affected Americans of all ages, but are more common in younger people who are not usually prone to lung disease.

Young adults between 18 and 34 account for a worrying 67 percent of cases and 16 percent of the vaping illness victims are under 18.

Healthy organs would be dark, indicating they are clear. Tissue samples suggested he had the respiratory illness lipoid pneumonia: a potentially serious disease caused by inflammation of the lungs.

Doctors believe it was triggered by vaping. The man was prescribed steroids.

Dr Abbara, who is also editor of the journal, said: ‘The diagnosis of lung injury due to vaping should be a differential possibility in patients presenting with lung abnormalities on radiographs or chest CT images and exposure to e-cigarette products within 90 days of the presentation.’

Dr Abbara and co author Dr Fernando Kay, of the department of radiology at UT Southwestern Medical Centre, aim to raise awareness on how to identify lung illnesses caused by vaping.

They said research should be approached as a team effort by members of multiple specialties including pathologists, epidemiologists, pulmonologists and emergency physicians.

Dr Abbara added: ‘It is crucial that radiologists drive some of the initiatives to better understand the mechanisms of disease presentation, facilitating the diagnosis and management of these patients.’

The first case was reported at the end of March but authorities have still not identified the chemicals that are causing the illness. It also remains unclear if all cases are the same kind of injury.

The outbreak does not appear to be linked to long-term use of nicotine e-cigarettes, which have been used in the US for over ten years.

Officials instead believe illicit products containing THC – the psychoactive component of cannabis – are to blame.

Public Health England (PHE) has said it is possible similar items are being sold in the UK, and stressed users should buy from reputable sources.

Studies have shown vaping can cause similar damage to that seen in smokers of traditional cigarettes – and people with chronic lung disease.

Earlier this week PHE said it is ‘as certain as ever’ that vaping is less harmful than smoking.