Drinking diet drinks may make people more likely to gain weight than sticking to full-fat versions, according to scientists.

A study of more than 5,000 people in the US suggested people choosing Diet Coke or Diet Pepsi, for example, might be fooling themselves.

They actually tended to eat just as much sugar as anyone else, and this could be because they felt they deserved it for picking a sugar-free drink.

And the chemicals contained in artificial sweeteners may change the bacteria in the gut and make people more likely to gain weight or develop diabetes, experts say.

The paper adds to a growing pile of research which has found damaging health effects of diet drinks – other scientists have linked them to issues with the heart and circulation, and found they increase the risk of dementia or a stroke. 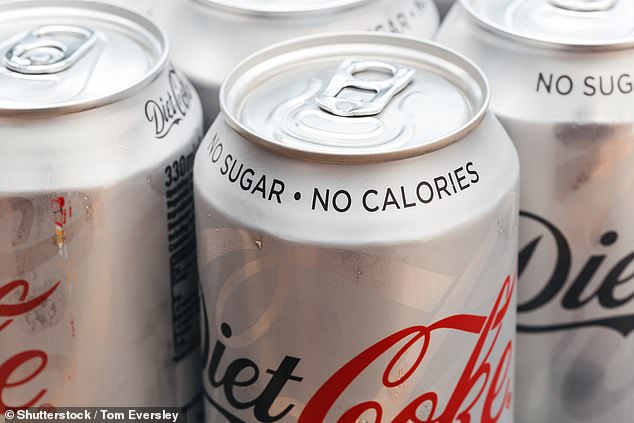 ‘Consumers of artificial sweeteners do not reduce their overall intake of sugar,’ said Professor Peter Clifton, from the University of South Australia.

‘They use both sugar and low-calorie sweeteners and may psychologically feel they can indulge in their favourite foods.

‘Artificial sweeteners also change the gut bacteria which may lead to weight gain and risk of type 2 diabetes.’

Professor Clifton and colleagues had actually set out to find whether sweeteners had an effect on people’s risk of type 2 diabetes.

Adults who have at least one diet drink a day are three times more at risk from a stroke or dementia, research revealed in 2017.

Scientists said the sugar-free drinks should no longer be regarded as the healthier alternative and urge the public to stick to water or milk.

Their study of almost 4,400 adults also suggests diet drinks are more likely to cause strokes and dementia than those full of sugar.

There was no link between sugary beverages and either of the illnesses – although the researchers aren’t encouraging people to drink them either.

The team of scientists from Boston University believe the artificial sweeteners including aspartame and saccharine may affect the blood vessels, eventually triggering strokes and dementia.

Diet drinks account for a quarter of the sweetened beverages market but there is growing evidence they are not as healthy as previously thought.

This form of diabetes is mostly caused by an unhealthy diet and lack of exercise, which stop the body being able to process or control sugar in a healthy way.

Their study found there was some evidence the diet drinks ‘modified’ the bacteria in the digestive system, but no proof they caused diabetes.

In the course of the research the team revealed that artificially sweetened drinks are now a $2.2billion (£1.7bn) industry. It did not name drink brands explicitly.

And drinks that contained the sweetening chemicals, which are often dubbed ‘diet’, were likely to actually have the exact opposite effect and make people fatter.

Professor Clifton added that the number of children drinking diet drinks has tripled in the past 20 years and has risen by 54 per cent among adults.

The sweeteners are used instead of real sugars – glucose, fructose and sucrose – and don’t usually contain any calories.

Real sugar is packed with calories, which means it causes weight gain if people don’t burn them off.

While Professor Clifton’s study – as well as past research – did not show that sweeteners directly cause fat gain, it suggested they don’t stop people eating sugar.

‘A better option than low-calorie sweeteners is to stick to a healthy diet, which includes plenty of whole grains, dairy, seafood, legumes, vegetables and fruits and plain water,’ Professor Clifton said.

The research was published in the journal Current Atherosclerosis Reports.