In research conducted on mice, scientists from Massachusetts General Hospital looked at one group of rodents that ran on treadmills daily and one group that did not.

The mice that got exercise every night had lower levels of a type of immune system cell that can turn into white blood cells.

This lowered their risk of chronic inflammation, which contributes to the formation of plaques that block the arteries and can cause cardiovascular disease. 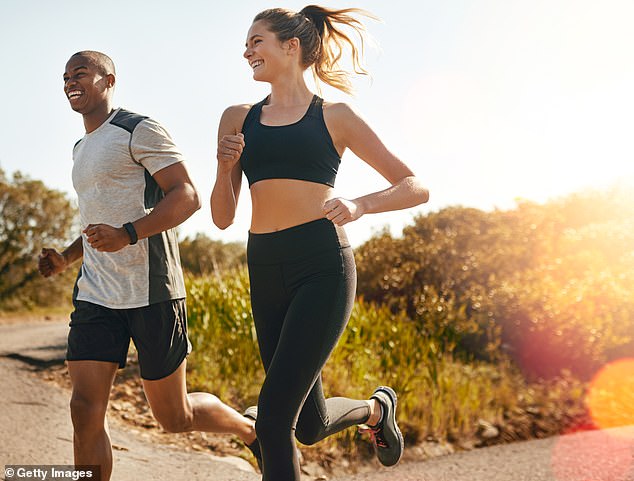 A new study from Massachusetts General Hospital conducted in mice has found that exercise lowers overproduction of white blood cells, which reduces inflammation and risk of heart disease (file image)

Heart disease is currently the number one killer in every country including the US.

According to the National Institutes of Health, the risk for coronary heart disease begins increasing for men at age 45 and for women at age 55.

For the study, published in the journal Nature Medicine, the team studied mice that were split into two groups.

One group was put into cages with treadmills, where some of the rodents ran as many as six miles per night.

The second group was put into cages without treadmills. After six weeks, the two groups were compared.

Researchers found that the mice that ran on treadmills had reduced levels of cells found in the bone marrow known as hematopoietic stem and progenitor cells (HSPCs).

HSPCs have the ability to turn into any type of blood cell, including white blood cells called leukocytes, which increase inflammation.

‘We were surprised by how much mice loved to run,’ lead author Dr Matthias Nahrendorf of the Center for Systems Biology at Massachusetts General Hospital told DailyMail.com.

‘But we were also surprised that the effects of running stayed with the mice for a while, for as long as two to three weeks after [the end of the study period].’

Additionally, researchers found the mice that exercised produced less leptin, which is a hormone responsible for controlling appetite.

Previous studies conducted by the team showed high levels of leptin and leukocytes in humans that had cardiovascular disease linked to inflammation.

Dr Nahrendorf said the results shows the importance of exercise, but also how this could lead to new therapies for preventing heart attacks and strokes

‘In the future, we want to look for pathways that, like exercise, reduce the overproduction of white blood cells, because that reduces inflammation,’ he said.

‘I’m not saying we would have a pill but if we could look for a way to reduce inflammation – hit the pathways with a drug – that would be the holy grail in anti-inflammatory therapy.’