A 12-year-old girl’s life has been saved by a heart transplant after she almost died from a rare disease.

Kayleigh Llewellyn, from Seaham, County Durham, fell ill around three months ago when she woke up one morning for school struggling to breathe.

Doctors diagnosed her with cardiomyopathy and, to the shock of Kayleigh’s parents, warned a heart transplant was her only chance of survival.

The disease causes the walls of the heart to become thick or stretched, reducing the heart’s ability to pump blood. It can lead to heart failure or sudden death.

Kayleigh was wired up to machines in hospital that pumped blood around her body for her, giving her heart a rest while she waited for a donor.

After around six weeks in intensive care, Kayleigh – who spent some time in a coma – was told she would receive a new heart in time for Christmas.

Kayleigh is now recovering from the surgery in Newcastle’s Freeman Hospital and is excited to go back to playing sports. 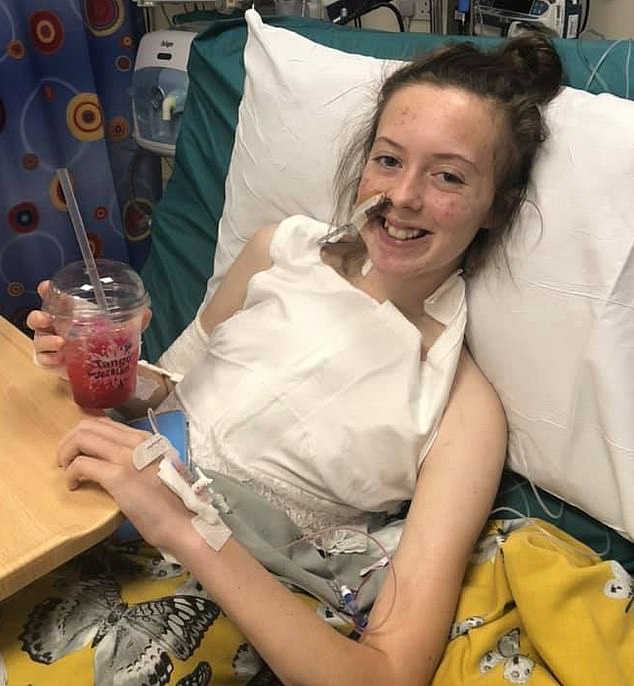 Kayleigh Llewellyn, of Seaham, County Durham, has been saved by a miracle heart transplant after she almost died from a rare disease of the heart muscle 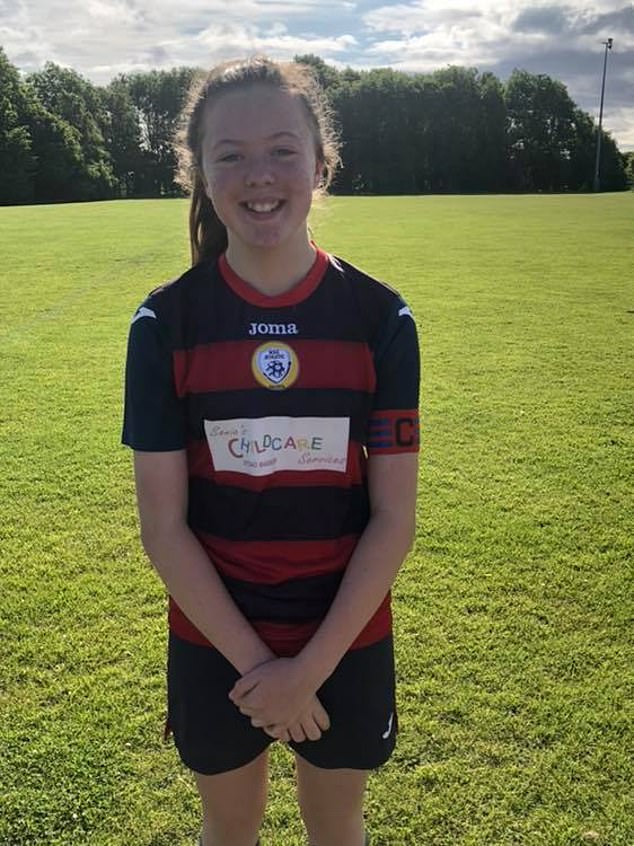 Kayleigh fell ill around three months ago when she woke up one morning for school struggling to breathe. She was fit and healthy up until this point (pictured in her football kit) 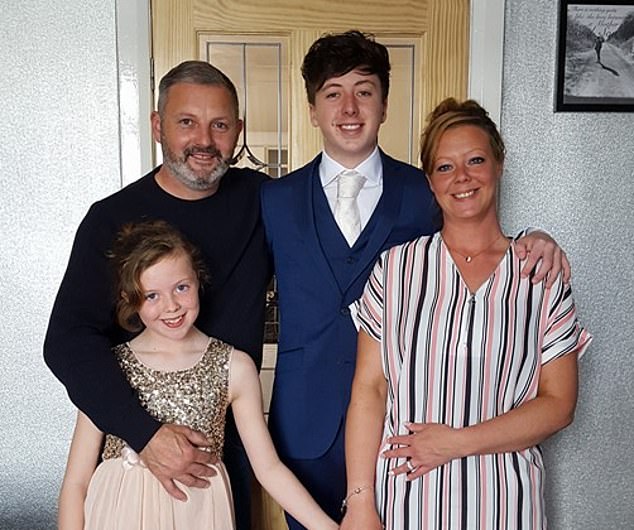 Doctors told Kayleigh’s parents, Shaun Sidney, 50, and Sonia Llewellyn, 41, a heart transplant was the only was Kayleigh could survive. They are pictured together a few years ago

Her father, Shaun Sidney, 50, said ‘words are not enough’ to express his gratitude to the donor’s grieving family.

He said: ‘The whole ordeal has been our worst nightmare but now Kayleigh has been given the gift of life. It’s the best Christmas present we could ever ask for.’

Mr Sidney also praised the landmark law change to organ donation, which will come into effect in 2020.

All adults in England and Scotland will be listed as an organ donor when they die, unless they have recorded a decision to ‘opt-out’.

Kayleigh, a keen footballer, told The Daily Mirror: ‘I want to thank the family of the donor. If it had not been for them, I would not be here today.’

She woke up with breathing difficulties and took the day off school – but her parents thought it was her asthma, the Sunderland Echo reports.

The next day, she had chest pains. Other signs of cardiomyopathy include swelling of the ankles and dizziness.

Kayleigh was taken to Sunderland Royal Hospital that same day after her parents rang 111.

Her heart rate was found to be abnormally high and tests confirmed that she had cardiomyopathy.

The disease is a frequent cause of sudden cardiac arrest in young people, according to the National Heart, Lung and Blood Institute.

It cannot be cured. Treatment is usually to slow the progression. Drugs and changes to lifestyle are considered before surgery.

In Kayleigh’s case, doctors said she urgently needed a heart transplant to save her life.

She has been cared for at the specialist heart department at the Freeman Hospital ever since, with her childminder mother by her side the whole time.

Kayleigh had a temporary ventricular assist device fitted to the left side of her heart, which can keep blood pumping for patients with a damaged heart.

The right side was linked to an ECMO machine that pumped and oxygenated blood outside her body, allowing her heart and lungs to rest. 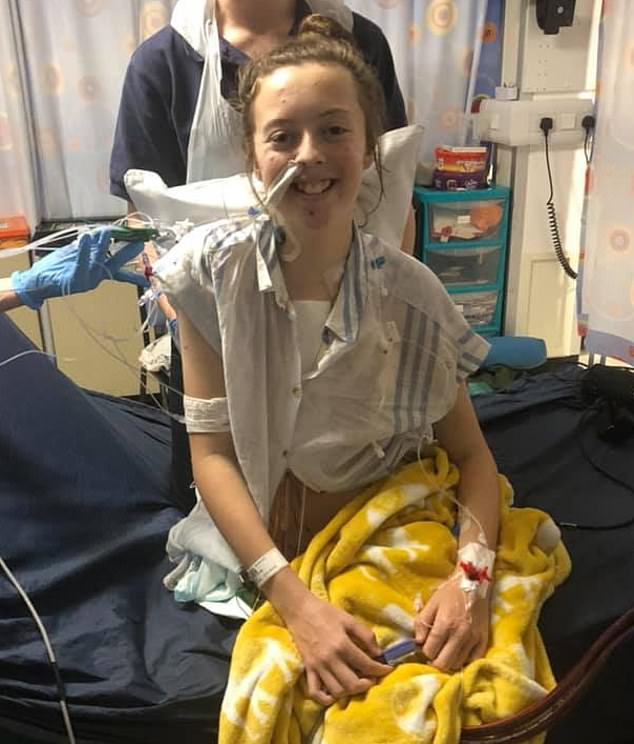 After around six weeks in intensive care, Kayleigh was given the news she would receive a new heart in time for Christmas. She is pictured at Freeman Hospital, Newcastle 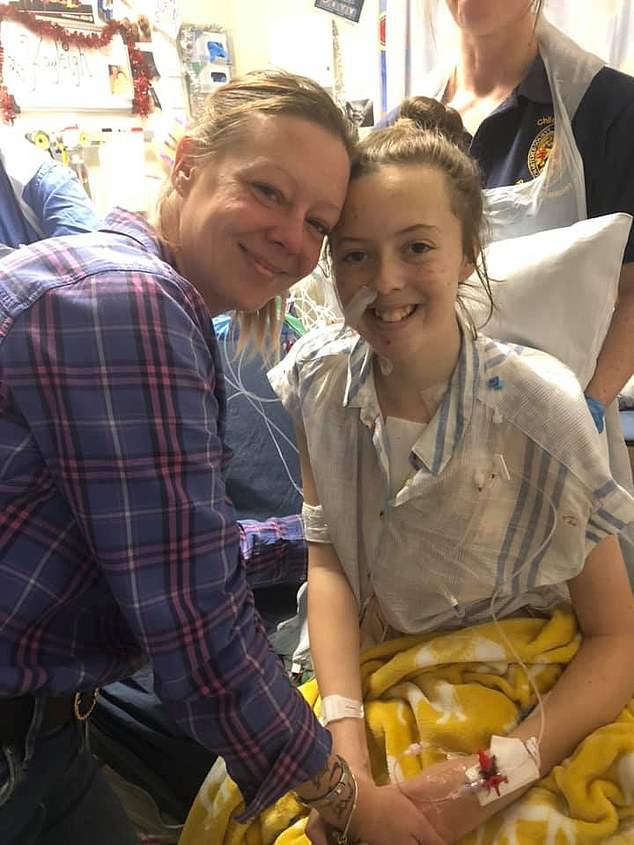 Kayleigh, who is now recovering in hospital, and her family wish to thank her donor’s grieving family. Mr Sidney said ‘words are not enough’ to express his gratitude

After a month in intensive care, Kayleigh was placed on the urgent transplant list in November which fast-tracked her to receive a heart.

On the transplant waiting list, it can take either a few days, months or even years to receive the donor. Around one in six people do not receive the heart transplant they desperately need.

Cardiomyopathy is a disease of the heart muscle that affects its size, shape and structure.

The condition is usually inherited.

The three main types of cardiomyopathy are:

All of these types of cardiomyopathy affect the heart’s ability to pump blood around the body efficiently.

They can also impact the way electrical signals make the organ beat.

There is no cure, however, in most cases people’s quality or length of life is unaffected.

Therapies may include medication, treatment to normalise heart rhythm, pacemakers and, in rare cases, heart surgery or transplants.

Kayleigh was rushed to theatre after a suitable donor heart was identified after just one week.

However, the operation had to be cancelled because ‘bad weather’ delayed the arrival of the organ, causing the organ’s condition to deteriorate.

Surgeons put Kayleigh in a coma to rest her body while a mechanical heart pump was fitted to take over the work of one or both sides of the damaged heart.

One week later, another heart donor was identified who was the perfect match for Kayleigh. She was wheeled into theatre and the operation was a success.

Mr Sidney, a father-of-two, who had a heart tattooed onto his chest to mark the event, wanted to thank the family who donated the organ.

He said: ‘We hope to meet them one day to say thank you, the biggest thank you I could ever give. But even then words are not enough.

‘We appreciate everything they have gone through… The joy they have given is absolutely phenomenal.’

Kayleigh could be home in the next few days and is looking forward to raising awareness of organ donation and the opt-out system which will come into effect next year.

Adults will be listed as an organ donor when they die, unless they apply not to be. However, families will still be given the ‘final say’ over whether their relative’s organs can be taken.

Families are therefore being urged to discuss their wishes with their loved ones.

Mr Sidney said the family had never given any thought to organ donation until their own daughter became ill and ‘turned their life upside down’.

There are no definite figures for how many people have cardiomyopathy because some people may be living with the condition but not have any symptoms.

However, it is estimated around 160,000 people in the UK have cardiomyopathy. The CDC believes as many as one of 500 adults in the US have the disease.

Cardiomyopathy predominately affects adults and is rarely diagnosed in children. Around 30,000 children in the US have cardiomyopathy, according to Children’s Cardiomyopathy Foundation.

The new opt-out system is also known as Max and Keira’s Law. Max Johnson’s life was saved after he received a heart transplant in August 2017, following the death of Keira Ball, also nine.

WHAT IS THE LAW CHANGE TO ORGAN DONATION?

From spring 2020, organ donation in England will move to an ‘opt-out’ system. The law comes into effect in Scotland in autumn 2020.

All adults will be considered to have agreed to be an organ donor when they die unless they have recorded a decision not to donate.

This means adults still have a choice if they don’t want to donate their organs, but they must record this decision.

Its hoped to increase the number of families who agree for their relatives organs to be harvested.

This is because the family is still involved in any organ donation decision if a relative dies. They still have the right to overrule any decision made by the person who died.

It is important to tell family and friends of your decision to improve organ donation rates.

Some groups are excluded from the opt-out system, including people who lack the mental capacity to understand the new arrangements and take the necessary action, visitors to England and people who have lived in England for less than 12 months before their death.

The situation will not change for those under the age of 18, in which case the family are asked to make the decision.