Health officials in a southern Pakistani city say a rogue pediatrician’s reuse of syringe needles has led to nearly 900 children testing positive for HIV since an epidemic began earlier this year, according to a Saturday report.

Dr. Muzaffar Ghanghro, a pediatrician in the city of Ratodero, was arrested in May on charges of negligence and manslaughter after patients alerted investigators of his alleged unsavory practices, Pakistani media reported.

An investigation by police and health officials concluded Ghanghro’s “negligence and carelessness” was responsible for an outbreak of HIV in Ratodero, where about 200 adults also have tested positive for HIV since April, The New York Times reported. 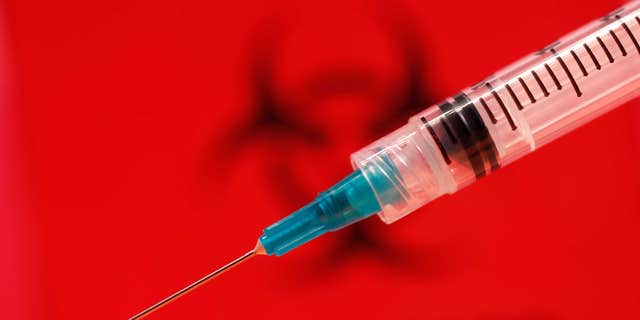 A Pakistani doctor is accused of reusing syringes on patients, leading to an outbreak of nearly 900 children and 200 adults.
(npin.cdc.gov)

But, health officials said the number of affected patients was likely higher, given that less than a quarter of Ratodero’s 200,000 have been tested, according to report.

The allegations against Ghanghro reflected a wider trend across much of Pakistan, where lack of knowledge on the subject has contributed to cases doubling since 2010, according to the United Nations’ task force on HIV and AIDS.

The organization said some 600,000 unqualified doctors were thought to be operating unlawfully in Pakistan – nearly half of them in the province where Ratodero is located.

After the outbreak was first reported, the government shut down clinics with unregistered doctors and illegal blood banks.

But clinics were said to have started reopening after media coverage dropped.

Imran Akbar, the doctor who first brought attention to the outbreak, told The Times: “Unless these quack doctors, barbers and dentists are not checked, the number of incidents of HIV infection will continue going up.”