Ali Meyer, 41, celebrated her 40th birthday last year and everything seemed well until she had a breast cancer screening exam six months later in October 2018.

But moments later the Oklahoma’s News 4 reporter appears in footage sobbing as she was given the devastating diagnosis.

The married mom-of-four claimed on Facebook Live: ‘I have breast cancer and I don’t have a tonne of answers right yet, but I’m going to have an MRI next week to confirm exactly what we’re dealing with and get a plan of action in place. 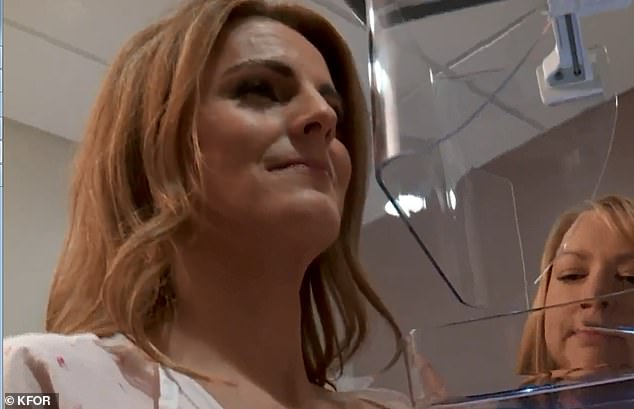 Oklahoma journalist Ali Meyer, (pictured), was diagnosed with breast cancer after she live-streamed her first ever mammogram for breast cancer awareness month

‘Because I’m only 40 the doctors recommended that I have genetic testing so I have already done that,’ she is heard saying at the time of her diagnosis.

News 4 has reported on Meyer’s journey as it was revealed she was battling the illness for the past 12 months.

She has shared details of her treatment journey on her Facebook and Instagram pages as she urges women to ensure they have regular mammograms.

Her story was featured on a News 4 special on Tuesday night and shows her as she had consultations with surgeons.

She attended Stephenson Cancer Center  for her mammogram and a Breast Health radiologist found cancerous calcifications in her right breast.

‘This has been hard and shocking. It does rock you to your core,’ Meyer said on Facebook Live one day after her diagnosis.

‘You guys have been really supportive, and I appreciate it so much. This is not the news I was hoping to tell you about to raise breast cancer awareness.’

Ali claimed she did not have any of the genetic mutations for the illness and after speaking to surgeons she was told she would have to have her right breast removed as part of her treatment. 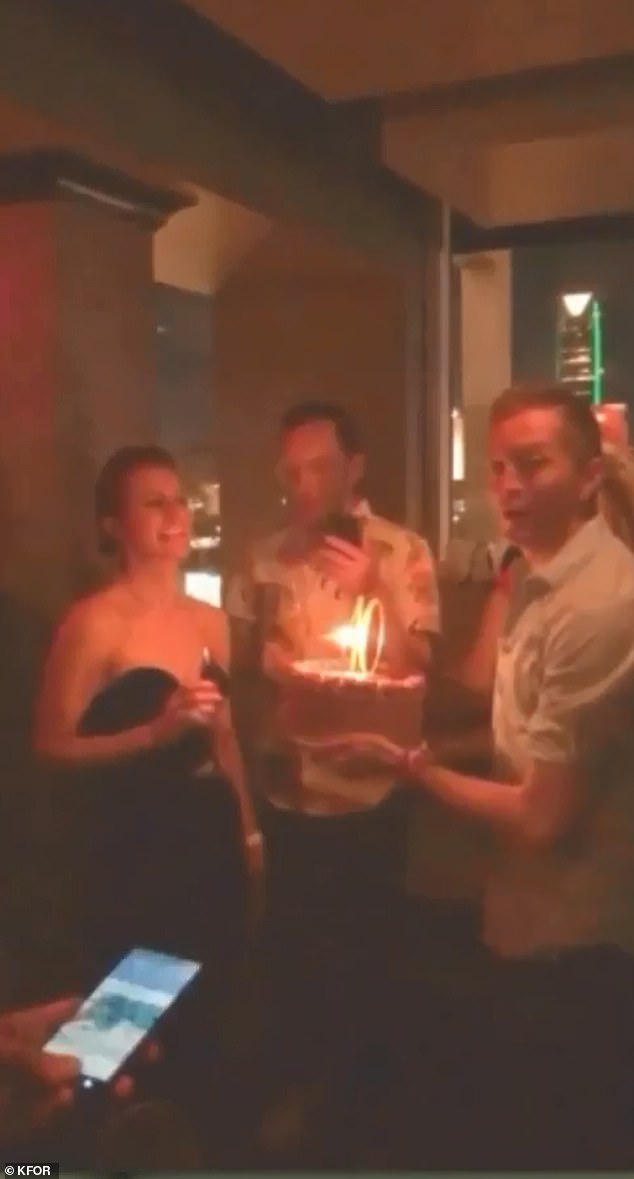 Ali Meyer, a married mother to four girls, claimed she was grateful for a life busting at the seams with good fortune until she had a mammogram as part of her job which revealed she had breast cancer 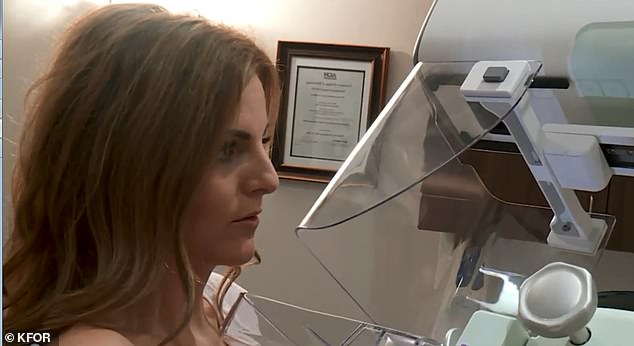 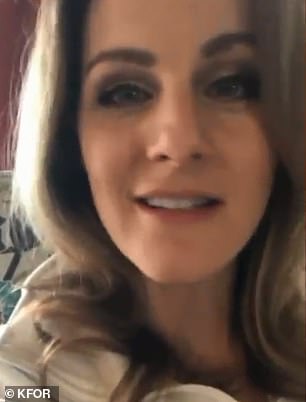 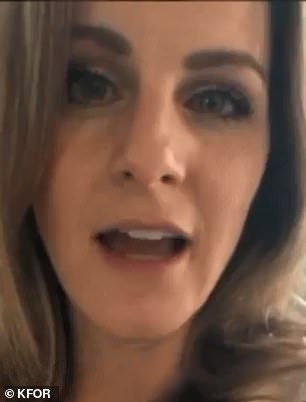 She said she was initially devastated by the recommendation but surgeons helped her understand that a mastectomy was her best choice and would not be as invasive as she had imagined.

‘Even though surgery was my choice, it felt like forced mutilation. It felt like cancer was stealing part of my body away from me.’

Thankfully the surgery went well and she revealed that plastic surgeon Dr. Oscar Masters ‘put me back together beautifully.’ 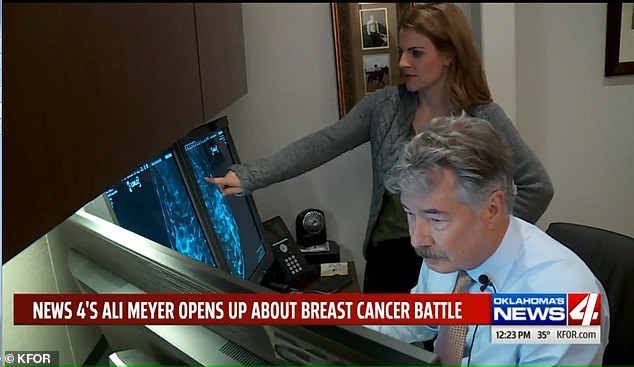 Breast Health Network Radiologist Dr. Richard Falk, (pictured), found cancerous calcifications in Meyer’s right breast after her mammogram. She is pictured with him above 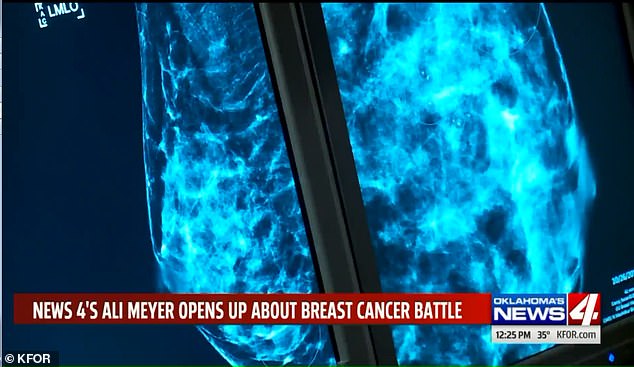 In the Facebook footage, Dr Masters explains: ‘If it’s safe to do for the patient, then more breast surgeons and plastic surgeons are opting to keep the nipple and areola.

‘Fortunately for you, you had a tumor that was more favorable. Sparing the nipple and areola was a good option for you.

Meyer then says: ‘My surgical options, my recovery and my outcome were all better because my mammogram found the cancer before I even knew it was there. 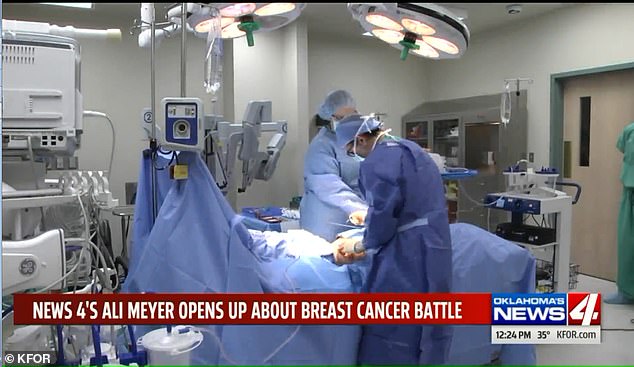 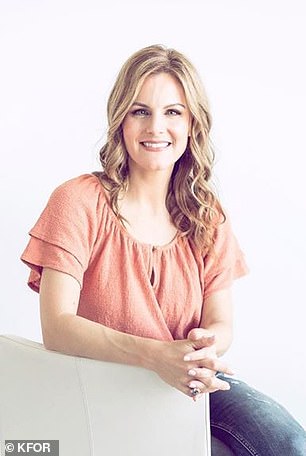 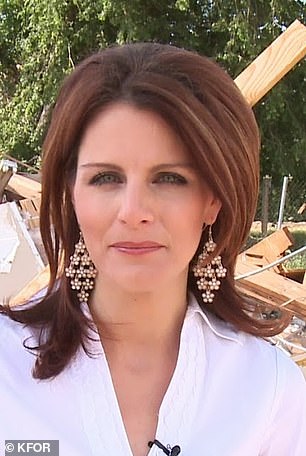 She received four regional Emmy Awards for her investigative and long-form reporting work and earned a National News Emmy Award as part of the KFOR team coverage of the 2013 Moore Tornado.

She added: ‘It’s been one year since diagnosis, and it is Breast Cancer Awareness month once again. This year I had my second, annual, 3D screening mammogram.

‘I am thrilled and relieved to tell you my mammogram was clear, showing no signs of breast cancer.’

Claire Turmelle, marketing coordinator at Stephenson Cancer Center, made Meyer’s appointment as she had reported on two Oklahoma women who shared their breast cancer journey with News 4 in October 2018.

In an interview for the news special claimed: ‘I think you showed people a really strong and powerful path for dealing with breast cancer.

‘Being informed, getting opinions, knowing your options and then also showing women not every journey is the same.’