Researchers analyze the oldest known measles sample taken from the lungs of a girl who died in 1912, leading to new theory that the deadly virus first emerged in large as early as 300 BC

By Michael Thomsen For Dailymail.com

This month a new study of the oldest known sample of the measles virus has revealed promising new insights into the history of the disease.

Researchers had previously thought the virus first emerged in the medieval era, some time between 400 AD and 1400 AD.

After analyzing the newly discovered sample, they now suggest measles could have first appeared in human populations around a thousand years before, as early as 300BC. 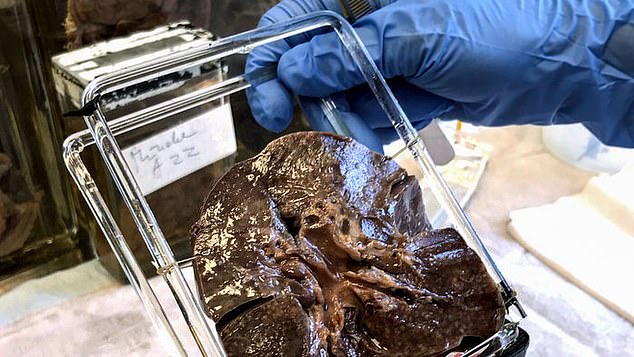 Researchers analyzed samples from the preserved lungs of a two-year-old girl who died from measles in Berlin in 1912 (pictured above), the oldest known measles sample by more than 40 years

The sample was discovered in the basement storage facility of the Museum of Medical History in Berlin, and hadn’t previously been examined by any other teams.

The specimen was a preserved lung taken from a two-year-old girl who died from measles in 1912.

Previously the oldest known sample of a measles virus dated back to 1954, and was used to develop the first measles vaccine.

The lung sample had been preserved in formalin, a formaldehyde mixture, which left it in ideal condition, according to a summary of the findings in Science.

Researchers were able to isolate the RNA from the measles virus contained in the sample and compare to more recent samples to better understand how the virus has changed over time.

One theory has it that the measles virus is an evolved form of a virus that’s been tied to sheep and goat from that date back to 300 BC and even earlier.

WHAT IS MEASLES, WHAT ARE THE SYMPTOMS AND HOW CAN YOU CATCH IT?

Measles is a highly contagious viral infection that spreads easily from an infected person by coughing, sneezing or even just breathing.

Symptoms develop between six and 19 days after infection, and include a runny nose, cough, sore eyes, a fever and a rash.

The rash appears as red and blotchy marks on the hairline that travel down over several days, turning brown and eventually fading.

Some children complain of disliking bright lights or develop white spots with red backgrounds on their tongue.

In one in 15 cases, measles can cause life-threatening complications including pneumonia, convulsions and encephalitis.

‘[It] can cause encephalitis which is inflammation of the brain.

‘Encephalitis can result in death or disability.’

Measles can be prevented by receiving two vaccinations, the first at 13 months old and the second at three years and four months to five years old.

It’s possible, though far from proven, that the virus could have made the jump between species as humans began to move toward more densely populated cities with less space between both their neighbors and their livestock.

Researchers suggest the virus depends on large populations to keep itself alive through exposure to new hosts, something that can be difficult because once a person’s been infected by the virus they develop a lifetime immunity to it.

For this reason, they believe the virus would have ideally needed populations of between between 250,000 and a million people to spread widely and not just die out.

The biggest cities in the world around the fourth century AD would fall within that population range—as many as a million people lived in Rome around that time and Xian, China is believed to have had a population of over 400,000.

‘It seems like changes in human ecology really did coincide with the successful emergence of these viruses,’ researcher Sebastien Calvignac-Spencer told Science.

Measles has been resurgent in the last several years, with more than 9.7 million documented cases in 2018 and 142,300 deaths, the majority of which were children under four years old.