Nobel laureate Michel Mayor, awarded in 2019 along with fellow Physicist Didier Queloz, was on a lecture tour in Spain when he heard about his Nobel Prize in Physics. A picture of Michel Mayor, tweeted by the official account of Nobel prize, sitting in the cafeteria of San Sebastian airport is making rounds on the internet. Mayor was wearing a priceless expression while going through all the messages after the announcement was made.

New laureate Michel Mayor was on a lecture tour in Spain when he heard the news about his #NobelPrize in Physics.

Here Mayor is in the cafeteria of San Sebastian airport, looking at all the messages flooding in! pic.twitter.com/NCYcgZYUXx

Internet in awe of the Nobel Laureate’s reaction

Social media was abuzz for all the right reasons after the official Twitter handle of Nobel Prize shared the picture. “The finest expression of satisfaction at the recognition, that is involuntary n natural. Salutes to the dedication for humanity,” commented a user. “How humble are scientists who know so much and how arrogant are religious zealots who know nothing,” wrote another user. 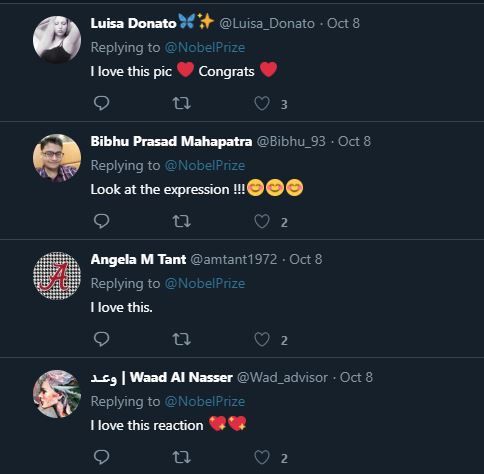 Read: Nobel Prize For Literature: Handke Never Thought They Would Choose Him

Michel Mayor, born in 1942 in Lausanne, Switzerland, received the coveted prize “for the discovery of an exoplanet orbiting a solar-type star”. According to the Nobel Prize foundation, the discovery by Michel Mayor and Didier Queloz started a revolution in astronomy and over 4,000 exoplanets have since been found in the Milky Way.

“Strange new worlds are still being discovered, with an incredible wealth of sizes, forms and orbits,” wrote the Foundation.

Mayor, professor at the University of Geneva, contributed to the first discovery of a planet outside our solar system, an exoplanet, orbiting a solar-type star, 51 Pegasi. The exoplanet moves rapidly around its star and takes four days to complete its orbit. After the discovery, two American astronomers were able to confirm it using their telescope.

“This year’s Laureates have transformed our ideas about the cosmos. Their discoveries have forever changed our conceptions of the world,” said the Swedish Academy.

(with inputs from agencies)