Scientists have admitted they have no idea how a newly-found enterovirus infects other cells.

Normally, a virus replicates by attaching itself to a host cell using tiny spikes on its shell, resulting in illnesses such as the flu.

But researchers in Japan say the virus – found while combing through pig faeces –doesn’t have a spiky outer shell.

Experts at Tokyo University of Agriculture and Technology are, therefore, baffled by how the virus is able to attack cells.

Professor Tetsuya Mizutani, who led the research, said: ‘We may be facing an entirely new system of viral evolution.’ 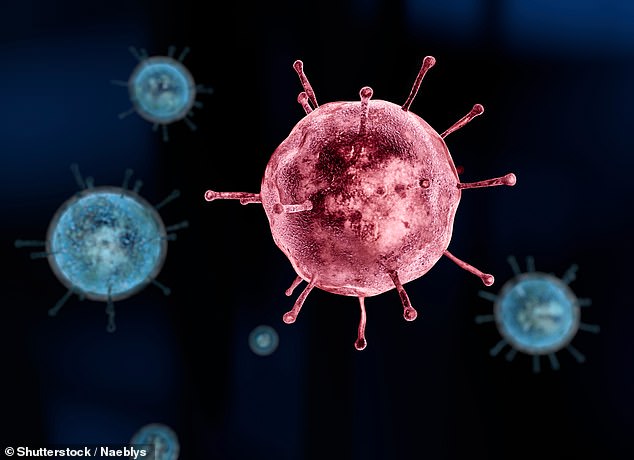 Viruses are simple, non-living creatures, which are made of genetic material called RNA and DNA.

The spiky coat, called a capsid, is made of protein and comes in various structures, depending on the virus.

Enteroviruses cause a number of illnesses, from rashes in small children to colds, encephalitis and even diarrhoea.

Pig farms are filthy environments and home to scores of viruses which evolve rapidly, making them ideal for scientific research.

Other enteroviruses from the G family (EV-G) are found in pig faeces. But the newly discovered type is a ‘novel defective’ variant.

The type 2 EV-G can’t possibly invade a host cell on its own because it doesn’t have the same structures as other strains.

Viruses are unable to replicate without first making a viral particle to invade a living host cell.

Professor Mizutani and colleagues believe the strain is being aided by a ‘helper virus’, but at this stage it’s impossible to know how.

‘We are wondering how this new virus came to be, how it infects cells or how it develops a viral particle.’

Professor Mizutani added: ‘Our future work will be on solving this mystery of viral evolution.’

Similar amounts of type 1 and type 2 EV-G virus cells were found in the pig faeces, and it is possible the ‘helper virus’ is type 1.

The findings were first published in the journal Infection, Genetics and Evolution, a publication printed by Elsevier.

HOW DO VIRUSES WORK?

A virus particle, or virion, is made up of three parts: a set of genetic instructions, either DNA or RNA; coat of protein that surrounds the DNA or RNA to protect it; a lipid membrane, which surrounds the protein coat.

Unlike human cells or bacteria, viruses don’t contain the chemical machinery, called enzymes, needed to carry out the chemical reactions to divide and spread.

They carry only one or two enzymes that decode their genetic instructions, and need a host cell, like bacteria, a plant or animal, in which to live and make more viruses.

When a virus infects a living cell, it hijacks and reprograms the cell to turn it into a virus-producing factory.

Proteins on the virus interact with specific receptors on the target cell.

The virus then inserts its genetic code into the target cell, while the cell’s own DNA is degraded.

The target cell is then ‘hijacked’, it begins using the virus’ genetic code as a blueprint to produce more viruses.

The cell eventually bursts open to release the new, intact viruses that then infect other cells and begin the process again.

Once free from the host cell, the new viruses can attack other cells.

Because one virus can reproduce thousands of new viruses, viral infections can spread quickly throughout the body.