A team of scientists from Canada’s McMaster University used a combination of
nano-scale surface engineering and chemistry to develop a plastic surface — a treated form of transparent wrap — which repels all kinds of bacteria.

The coating, inspired by water-resistant lotus leaves, is textured with microscopic “wrinkles” that block out external molecules and are chemically treated, meaning that water, blood or bacteria bounce away when they come into contact with the surface.

The plastic covering can be shrink wrapped onto surfaces that are considered common breeding grounds for bacteria like
MRSA — such as door handles, railings and IV stands.
“We developed the wrap to address the major threat that is posed by multi-drug resistant bacteria,” Leyla Soleymani, an engineering physicist who co-led the research, published Friday in the journal
ACS Nano, told CNN.

“Given the limited treatment options for these bugs, it is key to reduce their spread from one person to another,” she added.

The researchers believe the new material could also be used to package food, and could stop the spread of bacteria such as E.coli, salmonella and listeria from raw meats and foods.

Some 20% of all drug-resistant infections come from the food we eat, according to the
CDC.

“We’re structurally tuning that plastic,” Soleymani said in a statement. “This material gives us something that can be applied to all kinds of things,” she added. 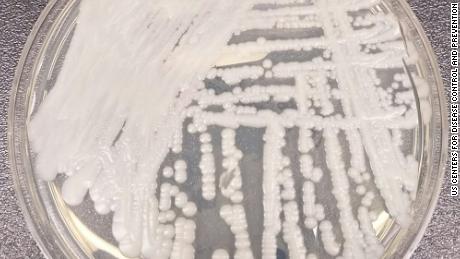 The surface, the researchers say, is durable, flexible and inexpensive to make.

They tested the material using MRSA and
Pseudomonas — considered the most dangerous forms of antibiotic-resistant bacteria — using electron microscope images to confirm that virtually no bacteria could transfer to the surface.

“We can see this technology being used in all kinds of institutional and domestic settings,” Tohid Didar, who co-led the research, said. “As the world confronts the crisis of anti-microbial resistance, we hope it will become an important part of the anti-bacterial toolbox,” he said.

CNN’s Elizabeth Cohen and Nadia Kounang contributed to this report.