Smoking during pregnancy may cause SIDS by damaging brain cells that tell the tongue to move and open a sleeping baby’s airway, study suggests

Nicotine in tobacco damages brain cells that control the tongue – stopping it from moving and opening the airway.

Known as hypoglossal neurons, they control a nerve that runs from grey matter to the underside of the tongue.

In the womb babies have short pauses in breathing that last a few seconds before the tongue kicks into action and revives them.

The discovery, made by Arizona University scientists, suggests a potential mechanism whereby infants stop breathing during sleep – leading to SIDS. 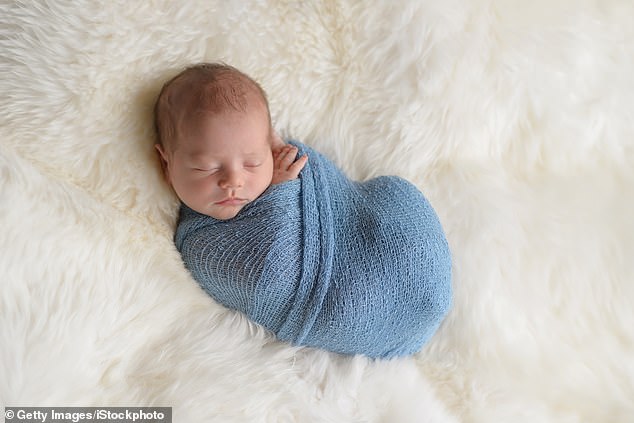 Babies exposed to nicotine in the womb may have a neuron defect that prevents their tongues from moving away from their airways, causing breathing problems while they sleep they sleep and perhaps causing SIDS, a new study suggests

In experiments on newborn rats, exposure to nicotine during development inhibited the function of the hypoglossal neurons.

Lead author Dr Lila Wollman said: ‘This impairment may be a factor in sudden infant death syndrome in humans.’

Normally, when breathing is obstructed, such as a blocking an animal’s nostrils, a flood of chemicals activates the brain cells to move the tongue and open the airway.

At rest, neurons that were exposed to nicotine behaved normally in the laboratory animals.

However, during the breathing stressor test, they did not respond as robustly when compared to those in another group of rats that acted as a control.

This led to difficulty in breathing, say the US team whose findings are published in the journal eNeuro.

Dr Wollman, a neuroscientist at Arizona University, explained: ‘The hypoglossal nerve activates the muscles of the tongue.’

Her team exposed rats to nicotine both in the womb and during the first few days of life.

They then measured the electrical activity of hypoglossal neurons during normal breathing and when breathing is stressed.

‘Fetal and early life nicotine exposure in human babies could weaken their respiratory reflexes, increasing their susceptibility to sudden infant death syndrome in the face of a breathing obstruction,’ Dr Wollman said.

‘This could lead to more intense inhibition of hypoglossal neurons in response to nicotine.’

Smoking has been linked to SIDS for years – but the reason for the link has remained a mystery.

The number of babies dying from unexplained causes in both the US and Britain has fallen substantially, but 2,000 still die of SIDS a year in the US.

Experts believe the decrease is due to fewer women smoking during pregnancy and more awareness of dangerous sleeping conditions.

Both are known risk factors for infants suddenly dying for no apparent reason, when considered otherwise healthy.

Other measures that reduce the risk include putting babies to sleep in a crib beside your own bed for the first six months – and placing it on its back.

The baby’s head should also be uncovered – with their feet to the foot of the crib to prevent wriggling down under the covers.