Staying muscly could ward off heart disease in older men and protect them from heart attacks and strokes, researchers say.

The most muscular men and women were up to 81 per cent less likely to have a heart attack or stroke, compared to those with the lowest muscle mass.

The link held true only in men when factors such as diet, income, education, and physical activity were taken into account.

Experts this believe may be down to differences in hormones as we age and how these hormones interact with metabolism.

Rates of high blood pressure, diabetes and obesity – risk factors for heart disease – were lower among the most muscular men.

The researchers did not specify how much muscle the men had. They just divided them into three groups based on their muscle.

But they said exercising more and a protein-rich diet to preserve lean muscle may be an effective means of promoting heart health. 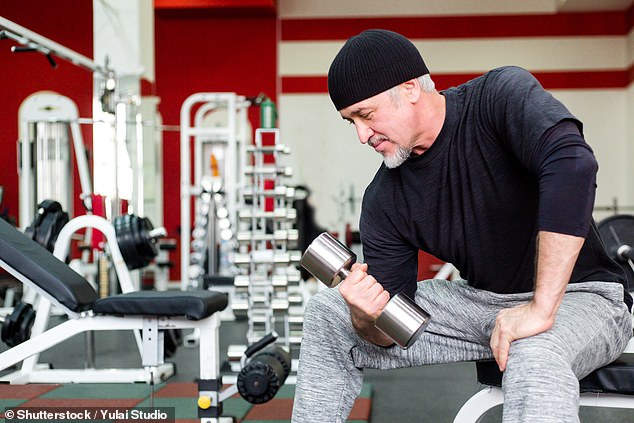 Maintaining muscle may be protective against heart disease in men, researchers believe

Muscle appears to help lower inflammation, preventing the build-up of fatty plaques in the arteries and therefore heart attacks and stroke.

Lean muscle has previously been shown to protect against high blood sugar levels – a risk factor for heart disease.

As we age, muscle mass reduces at a rate of around three per cent every decade starting from mid-30s.

Australian researchers and a team at Harokopio University, Greece, wanted assess whether muscle was protective against heart disease in healthy people.

They initially used data from 1,019 members of the public who were part of ATTICA, a population-based study in Greece.

The 534 men and 485 women were over the age of 45 and had no heart disease at the start of the research.

WHAT IS A HEART ATTACK?

Figures suggest there are 200,000 hospital visits because of heart attacks in the UK each year, while there are around 800,000 annually in the US.

A heart attack, known medically as a myocardial infarction, occurs when the supply of blood to the heart is suddenly blocked.

Symptoms include chest pain, shortness of breath, and feeling weak and anxious.

Heart attacks are commonly caused by coronary heart disease, which can be brought on by smoking, high blood pressure and diabetes.

Treatment is usually medication to dissolve blots clots or surgery to remove the blockage.

Reduce your risk by not smoking, exercising regularly and drinking in moderation.

Heart attacks are different to a cardiac arrest, which occurs when the heart suddenly stops pumping blood around the body, usually due to a problem with electrical signals in the organ.

They provided lifestyle information, including their diet and exercise for the study, published in the Journal of Epidemiology and Community Health.

Levels of circulating blood fats and indicators of inflammation were measured, as were blood pressure and weight. Skeletal muscle mass was calculated, too.

Over 10 years, there were 272 cases of cardiovascular disease, including stroke and minor stroke.

The fewest cases occurred in the third of people with the highest muscle volume at the start of the study.

And those in this group tended to be younger, male, and smokers.

They were more physically active, had higher levels of income and education, and typically ate a Mediterranean-style diet.

But when these factors were accounted for, muscle mass was only linked to a lower risk of heart disease among men.

This may be due to men having a higher muscle volume to start with and hormonal differences between men and women during ageing, the researchers said.

A ‘complex’ set of processes offset by muscle tissue may be protective against heart disease, the academics said.

Considering insulin resistance is a risk factor for heart disease, the researchers say the metabolic function of muscle has an impact on heart disease risk.

Inflammation may be good short-term to fight infections. But over a long time, it is linked to heart attack and stroke by irritating blood vessels.

Chronic inflammation plays a pivotal role in the development of atherosclerosis — the buildup of fatty, cholesterol-rich plaque inside the arteries.

The researchers said: ‘Half of the human body’s mass is actually skeletal muscle mass and it has an active role in numerous metabolic pathway.’

This is an observational study, and as such, can’t establish cause.