Female surgeons face higher risks of infertility or pregnancy complications than the general population because they are exposed to toxic ‘surgical smoke’ and radiation in the operating room, a new study suggests.

While we’ve long known that female surgeons face higher risks than other women, researchers at the Mayo Clinic say that efforts to reduce these risks have not been sufficient.

During operations, surgeons may inhale 25 chemicals, many of which may raise women’s risks of infertility or problems like low birth weight and delivering prematurely.

The Mayo Clinic team urges that women shouldn’t be kept from performing surgery, but rather that hospitals need to take measures like introducing better warnings and ventilation systems to help protect women. 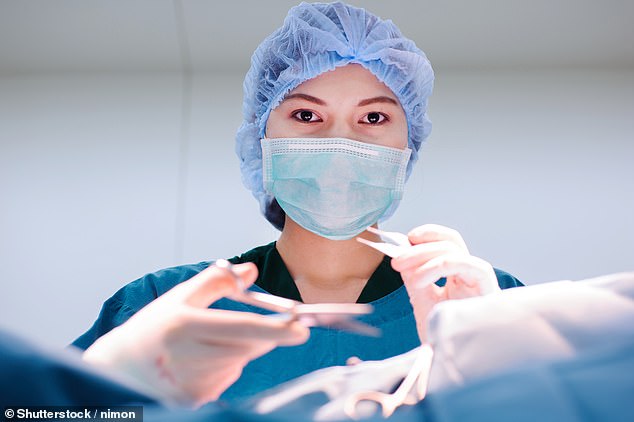 Female surgeons are exposed to dangers in the operating room, such as sharp objects, radiation and toxic fumes, that may raise their infertility risks (file)

Women now make up a substantial portion of the surgical workforce in the US and abroad.

In the US, nearly 21 percent of general surgeons are now women, a significant jump over the 13.6 percent that made up the group a decade ago.

Overall, the age at which US women have their first child has increased over time – and female surgeons tend to delay even longer.

According to a 2012 survey, the average age at which female surgeons got pregnant was 33, compared to 26 for the general population.

Nearly three times as many surgeons struggle to get pregnant as does the general population, according to the same survey, also conducted by the Mayo Clinic, in 2012.

For the new study, the Mayo Clinic examined a series of previous research articles on fertility, pregnancy complications and the various exposures women may face in the operating room.

The identified six total categories of potential risks, of which four could have substantial consequences for female surgeons who want to have children.

Perhaps unsurprisingly, radiation exposure in the OR posed risks for women, both in terms of their odds of getting pregnant and for the health of a developing fetus if  they did conceive.

They found that female surgeons’ exposure to radiation can increase the risks of a fetus dying in the womb, growth restriction during pregnancy, birth defects, microcephaly (an abnormally small head size) and cognitive issues, as well as a higher risks of childhood cancer for their babies.

In order to reduce these risks, the Mayo Clinic team recommended that exposure to radiation be limited to different thresholds for different periods of pregnancy, depending on the risk the guidelines are meant to address.

Surgical smoke – gases released into the air of the operating room during surgery – hasn’t been studied as a whole.

But once they broke down the component parts of surgical smoke, the researchers were able to find studies that analyzed the risks many carried for fertility and pregnancy.

Of those, particular matter – like that found in air pollution – raised the risks that women would have babies with low birth weights or go into labor early.

Toluene, another substance commonly found in surgical smoke, increased risks that women would be unable to get pregnant, or have babies with birth defects or cognitive issues.

A chemical known as 1, 2-dichlorethane also raised the risk of infertility and of spontaneous abortion in animal studies, though there’s little research on its effects in human women and developing fetuses.

Women’s benzene exposure was also linked to greater risks that their children would have cancer before adulthood.

‘At a minimum, workplaces need to comply with existing guidelines or standards, recognizing that these may not be protective for reproductive outcomes, and so that it may be wise to do more,’ the study authors wrote.

‘Alternative work duties and/or conditions should be readily available. Priority should be given to controlling exposure rather than restricting surgeons’ activity.’

They suggested that emphasis should be placed on installing better ventilation systems to clear away toxic fumes in operating rooms – an effort already being made, but not to satisfaction.