A cheeky grin etched across his face, 18-month-old Gavin loves to throw around his toys like any normal toddler.

But unlike most children his age, the brave boy has already battled a rare genetic condition which has left a glaring physical mark.

For Gavin bears a huge growth on his jaw after being born with hundreds of small cysts which bulge from under his skin.

A gruelling treatment process saw him spend the first seven months of his life in hospital, where he endured relentless injections and multiple operations.

Now, parents Joseph and Victoria Silvestri, from Jacksonville, Florida, have spoken out about Gavin’s tough start with lymphatic malformation. 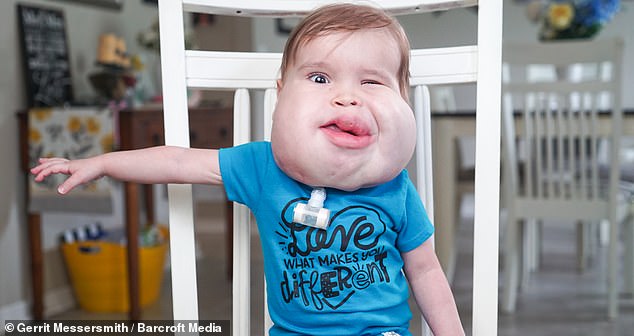 Gavin Silvestri, from Jacksonville, Florida, was born with abnormal growth of cysts within the head and neck 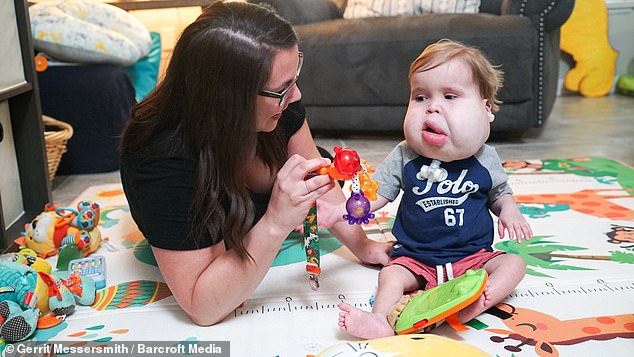 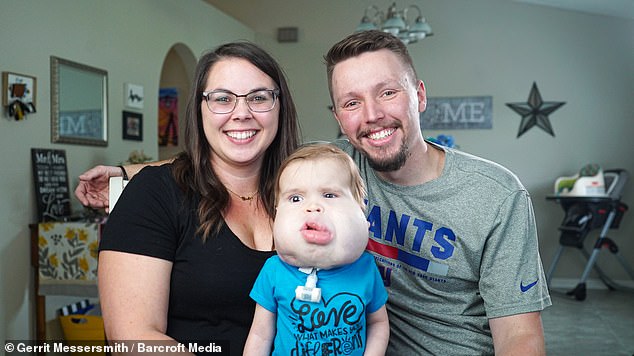 At her 18-week anatomy scan, Ms Silvestri’s dreams of a ‘fairytale pregnancy’ were flipped upside-down.

She said: ‘We were there to try to figure out if he was a boy or a girl and to measure all of his limbs and heart.

‘The ultrasound technician was doing her scan, everything was fine up until the point where she says “let me go grab the doctor”.’

The doctor revealed that Gavin would be born with lymphatic malformation – a build-up of abnormal cells in the head which creates a large mass and affects only one in 4,000 children.

Ms Silvestri added: ‘When I first found out that Gavin would be different, I was terrified. I didn’t know what to think.’ 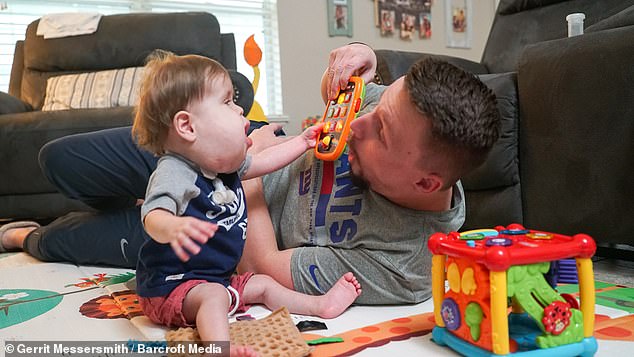 On February 8, 2018, Gavin was born and the Silvestris saw for the first time the severity of his malformed head.

Yet this did not faze the delighted couple, who like any parents were overwhelmed with joy.

Ms Silvestri said: ‘I wasn’t crying, I wasn’t upset, because that was him, that was my baby.’

But after just four days Gavin had to begin a long journey of sclerotherapy, which uses injections to target and shrink the cysts. 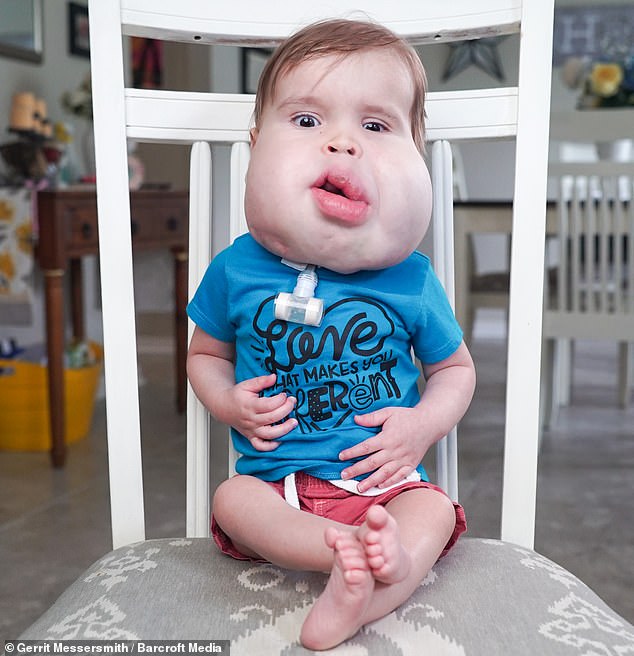 Gavin, 18 months, spent the first seven months of his life in hospital where he had multiple operations

WHAT IS LYMPHATIC MALFORMATION?

The lymphatic system forms part of the immune system that identifies and fights off invaders – such as bacteria and viruses – consisting of a network of vessels within the body which can sometimes be malformed.

A lymphatic malformation may appear as a lump just under the skin anywhere in the body.

Superficial lymphatic malformations can look like small bubbles under the skin.

A lymphatic malformation occurs when the lymph vessels fail to form correctly during the first few weeks of pregnancy.

As it occurs so early in pregnancy, they cannot be prevented.

However, the effects of the lymphatic malformation can be reduced or prevented.

Lymphatic malformations may swell and become tender or painful when the body is fighting an infection.

Ms Silvestri said: ‘His doctor would go in with a needle, drain the cysts, inject medicine, insert drains, let the medicine sit for 24 hours, then drain again.’

This process lasted five days a week for two months, at which point the baby boy required surgery for a tracheostomy – the insertion of a tube into the windpipe so air can enter the lungs.

Doctors operated on Gavin for seven hours, during which time he was chemically paralysed and relied on a ventilator to breathe.

Shortly after this first operation, Ms Silvestri said Gavin’s stitches unfastened due to infection and he had to have another procedure to fix them.

Overall, Gavin spent his first seven months in hospital before finally being discharged.

Hailing her son’s bravery, Ms Silvestri said: ‘Gavin is a special little boy because he is the light of our life. He has changed the way we view life completely.

‘Changed our mindset on basically everything; how we live, how we used to do things.

‘We still try to keep it somewhat normal, but I mean he’s just completely amazing.’

Since sharing their family’s story on social media, the couple said parents of other children with lymphatic malformation from around the world have contacted them.

Ms Silvestri said: ‘By having that feedback and having people reach out to me, I know I’m doing what I wanted to do – raise awareness and help families.

‘Hopefully they didn’t feel as helpless as Joe and I did when we first started out.

‘Having a child with a visible difference has taught me life is precious.’

Lymphatic malformation forms when part of a baby’s immune system doesn’t develop properly while it’s in the womb.

This is caused by an unpredictable genetic defect rather than a disease.

The condition is usually benign and doesn’t pose a serious threat to the child’s health, unless the cysts are left untreated or become so large they interfere with breathing, swallowing, circulation or other organ functions.