As flu season ramps up across the US, two deaths have among older women have been reported in Iowa and Texas has confirmed its first pediatric flu victim of the year, a young, unvaccinated child.

On Friday, Iowa officials announced that a woman between 61 and 80 years old had died, as had one elderly woman over the age of 81.

In Texas, a five-year old child from the Rio Grande region has died as well, officials said the same day.

As the five-year-old victim in Texas was unvaccinated, officials there are particularly stressing that parents need to take young children, who are more vulnerable to serious and even deadly complications, to get the flu shot. 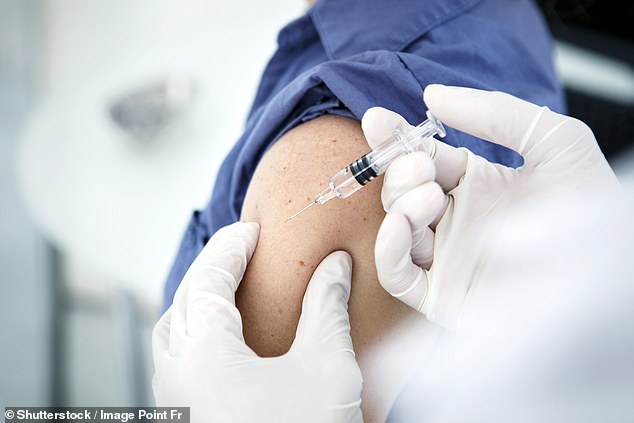 An unvaccinated child, age five, and two older women in Texas have died of the flu, officials in each state announced Friday. They urged all Americans to get flu shots (file)

‘The flu virus does have the potential to cause severe illness and death, especially in the very young, very old, or those who have underlying health conditions,’ said the Iowa health department’s medical director, Dr Caitlin Pedati.

‘This is a great time to get the flu vaccine to prevent yourself and your loved ones from becoming sick before flu activity increases further.’

Flu is an unpredictable pandemic that sweeps the world annually.

By this time last flu season, there had four flu deaths among children. This year there have been three, so the two seasons track closely thus far.

Children’s immune systems have often never encountered the flu virus before so they’re slow to recognize it and respond by deploying antibodies.

That means the virus has more of a chance invade various tissues and wreak havoc.

Plus, kids are more at risk of catching the flu in the first place because they’re hygiene practices tend to be lackluster.

Children under six months should not get the flu shot, but everyone over that age should and, even when its imperfect, it’s the fest defense available against the virus.

Elderly people as well – like the woman over 81 who died in Iowa – are at increased risk of catching and becoming seriously ill from the flu, as their immune cells start to degrade and can’t fight off infections as well.

But no one is entirely immune to the flu, and everyone who can should get the vaccine.

‘For more than 50 years, hundreds of millions have safely received seasonal flu shots,’ said Texas officials in a Friday tweet.