Skip to content
Home > > While millions are spent to fight the opioid epidemic, a meth crisis quietly grows in Wisconsin – Channel3000.com – WISC-TV3

While millions are spent to fight the opioid epidemic, a meth crisis quietly grows in Wisconsin – Channel3000.com – WISC-TV3

Methamphetamine cases in Wisconsin have ballooned by 450 percent. Service providers and health officials say more money is needed to combat it.

Jess Przybylski had never really dealt with loss. Then the father of her children was killed in a car crash. In 2011, her friends offered her methamphetamine to distract from the grief.

Soon after, Przybylski lost her job. Her two children were taken from her once, then once more when she was caught faking a drug test. A growing rap sheet eclipsed her college degree as she lost cars, relationships — and nearly her life.

“It was a one-time thing, and that was it,” Przybylski, who lives in Chippewa Falls in northwest Wisconsin, says of her meth addiction.

“It started out slow, but it was a pretty hard downward spiral for about five years … It gets to be where it just takes over your life and it’s not fun anymore. It’s all you think about.”

Like other amphetamines, meth elevates dopamine levels in the brain, creating a rush. But it is significantly more powerful than stimulants like cocaine, says Timothy Easker, director of Chippewa County Department of Human Services.

Meth can keep individuals awake for days on end, causing psychosis and even organ failure.

While the widely known opioid epidemic killed 3,800 people in Wisconsin between 2014 and 2018, a surge in meth use has quietly supplanted opioids in western and northern parts of the state, according to service providers and public health officials. 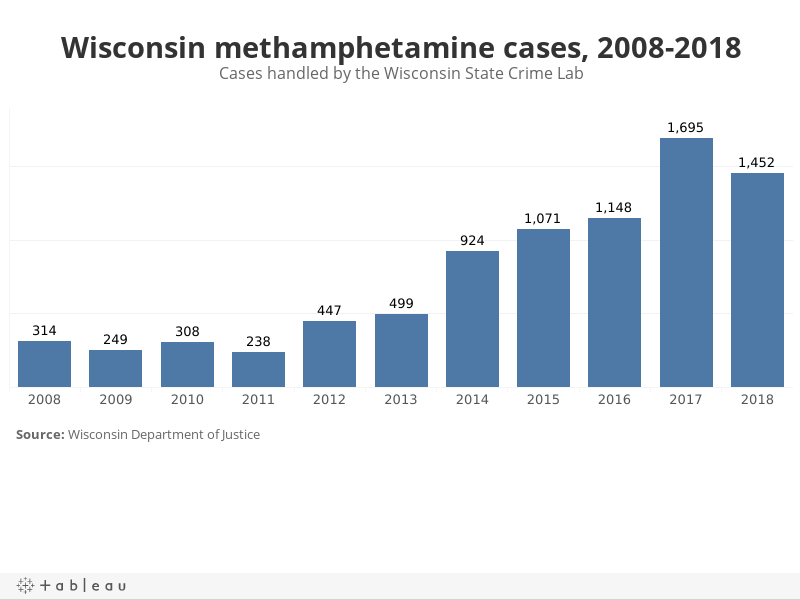 On Oct. 4, federal authorities in Madison announced that 16 people from Wisconsin and Minnesota were charged with state and federal counts of allegedly distributing meth in the Wausau area.

Unlike some Midwestern states, where police shut down hundreds of meth labs a year, in Wisconsin, the problem is more hidden. Much of the meth used here originates in Mexico and is transported to the Twin Cities, according to a 2016 analysis of methamphetamine use and trafficking compiled by federal and state law enforcement officials.

The drug can be in the form of powder, crystals or pills and can be smoked, snorted or injected.

Sheila Weix, director of substance abuse services at Marshfield Clinic’s Family Health Center, says that when she started treating addiction in central and northern parts of the state in the 1980s, alcohol, “nerve” pills, marijuana, cocaine and heroin were the most common. Then, in the early 1990s, meth appeared. Its prevalence rose, then ebbed when the opioid epidemic hit.

Now she is again seeing increasing numbers of people with meth addictions.

Robert Morrison, executive director of the National Association of State Alcohol and Drug Abuse Directors, says meth’s resurgence reminds him of the movie “Groundhog Day.” Ironically, some people are using meth to help with withdrawal from opioids. Others are using it because it is cheap and available.

“It’s about the buzz,” Easker says. “People use drugs for the buzz, and people get the most bang for their buck with (meth).”

Funding for heroin and pills — but not meth

Due to grant guidelines, more than $60 million in state and federal dollars that have been released to combat opioid misuse cannot be used to mitigate this new crisis.

Health care providers say they should be granted flexibility in how they use these funds.

“It should be the providers who are in the trenches everyday that should have a voice in determining what the needs are,” says Saima Chauhan, clinical team manager at Journey Mental Health Center in Madison. “We’re the ones every day …. seeing individuals and families that are suffering so tremendously from the effects of addiction.”

Morrison says widespread addiction to pain pills and heroin prompted Congress to direct a “historic investment” to combat the opioid epidemic. According to federal budget figures, Congress has appropriated at least $6 billion in the past five years for prevention, treatment and research.

Wisconsin has received $63 million in federal grants specifically targeted to opioid prevention and medication-assisted treatment, according to the state Department of Health Services.

Morrison says the nation was facing “shocking conditions” and needed a “jolt to the system.” He believes the jolt has been “tremendously helpful.”

But his group of state substance abuse officials favors more flexible guidelines, saying states are in the best position to decide where to spend money.

“The goal is to keep additional resources in the system,” he says.

As it is, most people in Wisconsin who need substance use disorder treatment still do not receive it. Less than 10 percent of the 397,000 people with addictions from 2016 to 2017 got treatment, according to the latest National Survey on Drug Use and Health.

Unified Community Services, the mental health agency of Iowa and Grant counties, has received funding from one federal grant to fight opioid abuse, says agency director Jeff Lockhart. Although the funds can be used to pay for a wide range of services, including detoxification and residential services, grant guidelines require the funds be used only for opioid-use disorders.

“We are very, very pleased to get those funds. Those allow us to do things we otherwise would have difficulty doing,” he says. “But in contrast … it leaves other substances without that same level of funding, so that does end up with a disparity.”

About 40% of substance abuse prevention and treatment funds in Wisconsin flow from the federal government. The rest is awarded through county and state programs such as Heroin, Opioid Prevention and Education. Although initial HOPE grants established several opioid treatment centers, recent grants have expanded treatment to include meth.

A 2018 report by the state Commission on Substance Abuse Treatment Delivery recommended even looser restrictions, allowing treatment for any type of substance abuse.

An estimated 22,000 people age 12 or older in Wisconsin used meth in 2016-17, according to the most recent federal drug use survey. Earlier surveys did not ask specifically about meth.

Other states, including neighboring Minnesota and Iowa, have even higher rates of use.

But meth use is surging in placing like Eau Claire County, where the number of meth-related jail bed days grew more than eight-fold between 2011 to 2015.

Meth use, cases up

In neighboring Chippewa County, the rise in meth use is reflected in the numbers of children placed in out-of-home care by Child Protective Services. In 2014, there were 28 children removed from their homes. By 2018, that number had grown to 115 children — 93% of whom were removed for reasons related to meth, says Kari Kerber, child and families manager for Chippewa County.

Two of these children were placed in Marcie and Jerry Lindbom’s home in Chippewa Falls, placed in foster care because of their parents’ meth use.

Marcie Lindbom sees the impact of meth at work, too. As a 4th grade teacher in the Chippewa Falls School District, she spends time each day dealing with traumas that her students have experienced. Some are unkempt and unfocused; others fall asleep because they cannot get rest at home.

“It’s like a stone in a pond,” Lindbom says. “The ripple effect of meth may not feel relevant unless it’s someone really close to you, but that ripple still reaches all of the people in our county.”

Children can be directly affected by their parents’ meth use, metabolizing the drug by inhaling it or absorbing its residue through their skin, Kerber says. When smoked, meth is like cigarette smoke but heavier. It gets everywhere, clinging to furniture, clothing and bedding, she says.

As opioids have taken center stage, Journey’s Chauhan says meth has been “hiding in the closet” in southern Wisconsin, in part because of the lower risk of overdose.

Kimberly Hill runs a sober-living house for women with opioid addictions in Dodgeville in southwestern Wisconsin. It has taken a long time for these grants to reach the area, she says. Without such services, people struggling with addiction go at it alone.

“You basically white knuckle it and go through it in hopes that your affected family members haven’t given up on you,” Hill says.

Three women currently living at Recovery Pathways’ Opportunity House say they used opioids — and meth. They say meth use is rampant in southwestern Wisconsin, with few options for treatment. It is is the only recovery house in Iowa County, with the next nearest facility in Madison, an hour away.

The grant that funds the house requires the money be used for opioid-related services, which has resulted in Hill having to turn people away because they do not have a qualifying addiction.

Ashley Beach used meth in part so she would have more energy while working night shifts. She worked nights to provide for her children and is pregnant now. Children are not allowed in most recovery houses, but Hill says she will not make Beach leave once the baby is born.

The facility is funded by a program at the University of Wisconsin School of Medicine and Public Health. Bridget Mouchon-Humphrey, program director for the Southwestern Wisconsin Community Action Program Inc., helped write the grant, which covers Iowa, Lafayette, Grant, Green and Richland counties. She says the group specified opioids because the drug was in the spotlight.

But now they are worried about meth, too.

“People will just bounce to a different drug, and meth seems to be the drug people are bouncing to. That’s always been the case, it always will be the case,” she says.

In some ways, treating an addiction to meth is more difficult than opioids.

There is no FDA-approved medication to help with meth withdrawal. And it can take an entire 28-day program to withdraw, making patients unable to focus on treatment, says Corina Fisher, behavioral care therapist at Prevea Health in Chippewa Falls.

Fisher says longer-term programs that span months to a year are “very beneficial” for recovery, especially for meth, which has a high relapse potential. However, providers say there are few options for inpatient or long-term care, a dearth of substance abuse counselors and lack of training in how to treat meth addiction.

“In some ways, we focus more on the opioids because there’s ways to solve the problem. There’s medications, there’s watching how you’re prescribing it … but with meth, we have very limited options of how to fully stop it,” Fisher says.

Jess Przybylski sat in jail for four months until a bed opened up at an inpatient treatment facility. Accessing treatment is even harder for those who are not arrested, says Przybylski, who has since regained custody of her children.

Przybylski says that without longer-term help like she received, many people leave treatment programs and go back to the life they were living before. The women at the recovery house in Dodgeville agree, saying they likely would have relapsed had it not been for Recovery Pathways.

“If you get out and you don’t have anywhere to go, where are you going to go? Back to what you’re comfortable with and back to where you were using,” Przybylski says.

This story is part of a public affairs reporting fellowship sponsored by Madison’s the Cap Times newspaper. As part of the fellowship, Parker Schorr is embedded in the Wisconsin Watch newsroom for nine months focusing on in-depth stories of statewide interest. The nonprofit Wisconsin Watch (www.WisconsinWatch.org) collaborates with Wisconsin Public Radio, Wisconsin Public Television, other news media and the UW-Madison School of Journalism and Mass Communication. All works created, published, posted or disseminated by the Center do not necessarily reflect the views or opinions of UW-Madison or any of its affiliates.