Eating yogurt and fiber could lower your risk of lung cancer, a new study suggests.

The report, published Thursday in JAMA Oncology, was based on an analysis of 10 studies from the U.S., Europe and Asia involving a total of about 1.4 million people. At a median follow up of eight years, researchers documented 18,822 cases of lung cancer.

After adjusting for known risk factors — such as smoking — researchers found those who ate more yogurt and fiber had a reduced risk for developing lung cancer compared to those who didn’t consume either. 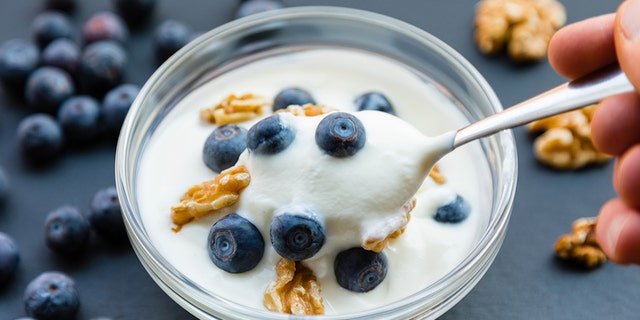 Could yogurt and fiber reduce your risk of lung cancer? Yes, says a new study.
(iStock)

When combined, those who had the highest intakes of both had a 33 percent reduced lung cancer risk.

Fiber and yogurt also reduced the lung cancer risk for smokers, who were considered in the study to be the most susceptible.

HOW YOU CAN GET LUNG CANCER, EVEN IF YOU DON’T SMOKE

“High consumption of fiber (prebiotics) and yogurt (probiotics) was related to a low risk of lung cancer. This association pattern was consistently seen among current, past smokers, and never smokers,” Xiao-Ou Shu, of Vanderbilt University Medical Center and the study’s senior author, told MedPage Today. “In addition to the known cardiovascular benefit of fiber and yogurt intake, physicians now have additional justification to encourage their care population to increase their consumption of these two types of [a] healthy diet.”

Speaking to The New York Times, Shu said it’s not totally clear why yogurt and fiber may reduce the risk of lung cancer.